The adobe homes were bought, added to, and modernized. A subdivision, Glenn Aire, was built in 1961, replacing with many houses the baseball fields where the men and boys of El Fuerte had played. 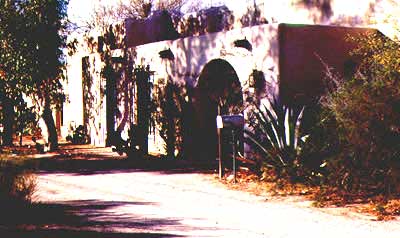 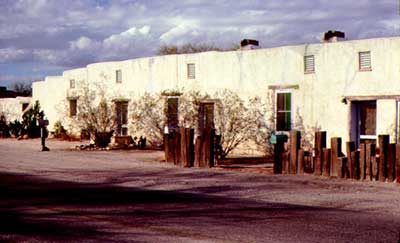 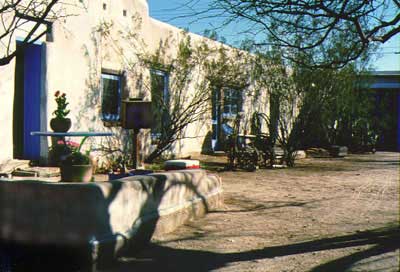 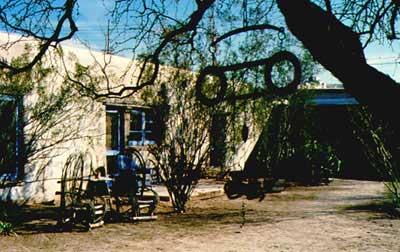 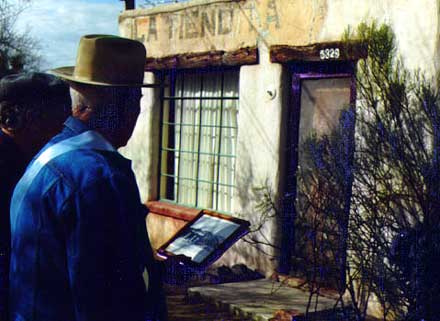 In 1948, the Catholic church built St. Cyril of Alexandria Catholic Church on Swan Road at Pima Street. The little chapel of San Pedro was abandoned, to be bought in 1957 by Ruth Phipps, and in 1965 by Nathan I. Krevitsky, "Nik," both of whom used it as a residence. In 1929 the old Fort Lowell school had been moved to a new building 5151 E. Pima Street -- the children carrying desks and supplies across the desert to the new location.The little store, La Tiendita, had never flourished and was sold.

More and more Anglos moved in, and some new Mexicans. Fort Lowell Road was paved; Craycroft Road was pushed through, demolishing one of the officers quarters and cutting the Fort grounds in half. Much later, Craycroft and Swan, which had come to dead-ends at Fort Lowell Road, were pushed across the Rillito to provide access to the developments in the Catalina Foothills.

Tucson grew, and the Fort Lowell Neighborhood grew with it. More individual homes were built and there were more developments of many homes. The ruins of the Fort became a County Park, with swimming pool, playing fields, Fort Museum, and protection of some of the old ruins. The Hohokam, the Fort, the Village of El Fuerte were largely memories – or ruins, exhibits, and cores for new structures.

But something happened in the seventies and early eighties.As it was losing it, Tucson began to become aware of its past. Preservation began to be a word which took on a new meaning. Historians and anthropologists, plus other people of vision, started to delve into the past.Tucson and Pima County had both produced ordinances which allowed the establishment of historic districts. In 1976, the first Pima County Fort Lowell Historic District was established. In 1981, a similar district was created in the city. There had to be two districts because by that time the City of Tucson had expanded its boundaries to Fort Lowell Road, although it was still county on the north side of the Road.

An interest in the people who had lived in these historic districts brought forth the fact thatmuch had happened here which would be worthwhile to explore. A grant from the Arizona Humanities Council supported investigations into the history of the Fort Lowell neighborhood. A delving into the history, and interviews with people who had lived there, began to paint a story of the communities which had peopled the place during two thousand years.

Since a grant from the Humanities Council required that the results of the work be presented to the public in some way, La Reunion de El Fuerte was envisioned -- and accomplished, not only in 1982 but annually in every year following. The book written to accompany that first walking tour, The People of Fort Lowell, has become a classic. The first La Reunion de El Fuerte was accomplished by a few people, but the ferment was aroused and shortly thereafter the Old Fort Lowell Neighborhood Association was formed and incorporated. The people began to know each other, and another community was formed.

The Neighborhood is known as forward-looking and productive, for the people in it -- not the governing officials, but with their help -- in 1983 produced the first neighborhood plan that crossed city-county borders.The people of this community are known as strong in the field of preservation and planning. They are known as a community which works together for the good of all.They have enhanced the concept of neighborhood.

The San Pedro Chapel was made the first City of Tucson Landmark in 1982. The Tucson-Pima County Historical Commission erected an historical plaque, in both Spanish and English, in front of the Chapel in 1990. In 1993 the historicity of the Chapel was recognized by being placed on both the State and National Registers of Historic Places.

"Nik" Krevitsky passed away in April, 1991, and the Chapel went into his estate. The people of the Neighborhood were in despair. How could they possibly acquire this community symbol and center and prevent its possible destruction? The Estate offered to sell it and the two acres of land on which it stands to the Neighborhood Association for the appraised price of $100,000 -- about one half the price at which it would be offered on the open market. Since it had to be purchased immediately, at the moment it was offered by the Estate, a trust was set up with twenty-seven people as trustees, plus the Tucson-Pima County Historical Commission. The Old Fort Lowell Neighborhood Association (OFLNA) requested, and was among the first to receive, a matching grant of $50,000, from the Arizona Heritage Fund through the State Historic Preservation office (State Parks Board) for the purchase of the Chapel. Thanks to the generosity of some 200 friends and neighbors, the matching $50,000 was raised. In February, 1993, the Old Fort Lowell Neighborhood Association, Inc., became the proud owners of San Pedro Chapel! A bell, the gift of a sympathetic friend, hangs in its tower.

Much remains to be done on the Chapel itself, and on the grounds. The interior is being returned to its original configuration. Thanks to a second grant-in-aid for $20,000 from the Arizona Heritage Fund, preservation and rehabilitation has been accomplished. Donations, and funds raised by the Old Fort Lowell Flea Market Sale, the Antiques and Collectibles Sale, and the Home Tour, supplied the matching funds and continue to pay for expenses.

A much needed parking area has been prepared next to Fort Lowell Road.

Some time in the future it is hoped that a building with facilities and more storage space can be constructed.

Without the hard work of many volunteers, willing workers all, none of this could have been accomplished. And there is much still to be done.

Against considerable opposition, in 1993 the City of Tucson annexed the area north of Fort Lowell and up to the rivers. The County and City Historic District became one, under the City. The Old Fort Lowell Neighborhood Association, Inc., came to be entirely within the borders of the City.

The roughly square mile area of the OFLNA is becoming a neighborhood, a functioning community.

Read the Report submitted to the Arizona Humanities Council by Edward H. Spicer.