A Record of Student Days

At Mammoth, Tom heard of a special two-year mining course of study at the University of Arizona. On August 20, 1899, he wrote President Parker a letter to request entry into the program. Tom was accepted, but, since he lacked a high school diploma, he was assigned to the preparatory school for two years of instruction. It took great courage and determination to be in the preparatory section where many students were half his age. Since he was self supporting, he needed to get a job to help pay for his school expenses. He found one right on campus as a gardener and laborer.

Tom began his academic career at a time of great optimism for the future. The late Victorian Era professed great confidence in the ability of man to control and shape his environment and society. Progressive reforms were the order of the day. Science and logic were depended upon to solve all problems. 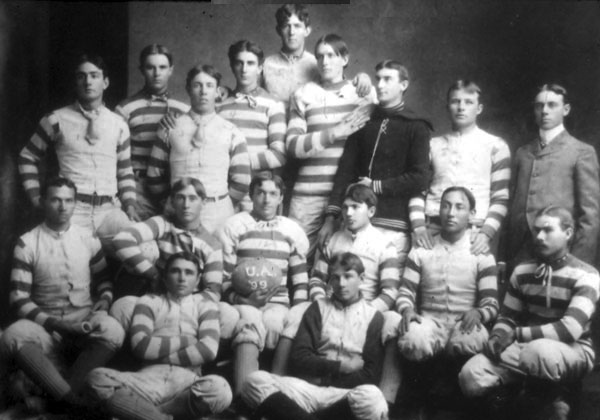 In the fall of 1899, enough players were recruited from the student body to field a team. Tom played on both the first (1899) and second (1900) football teams ever fielded by the University of Arizona. While some of the participants had never even seen a game, enthusiasm was nevertheless very high. The team members wore striped jersey shirts and stuffed old shirts underneath as shoulder pads. The canvas pants had some padding.

Some players wore canvas vests. Tucson merchants were asked for donations to help purchase the uniforms, but no funds were requested for helmets because in those days none were used.

Four games were played that fall. A practice game with the Tucson Town Team and a real game with that team at Carrillo's Gardens, an attractive, private tree-lined park near the Santa Cruz River southwest of downtown. The first "intercollegiate" game was played on Thanksgiving Day with Tempe Normal School. The final game on the schedule for 1899 was against the nearby Presbyterian Tucson Indian School.

According to his grades, Tom was an adequate, if not particularly enthusiastic student. As the spring semester came to a close, Tom looked forward to a planned trip to Alaska to prospect for gold. He was so anxious to get to Alaska, he left Tucson more than a month before the end of the semester and sailed for Nome on the "SS Portland." In July 1900, a census taker made a list of 485 persons recorded on the ship's passenger list and Tom Marshall was included. His photos of this time and a return trip in 1901 provide a graphic record of his life near the top of the world. Later, Tom was a member of the University Club and he gave a lecture on his observations and experiences mining in the Alaskan gold fields in 1900 and 1901.