The foundations of public transit in Tucson
A streetcar line for Tucson was a long time coming-over 17 years. March 20, 1880 was one of the most significant dates in Tucson's history, for on that day the first train arrived on the Southern Pacific Railroad, linking Tucson to the outside world. This event assured Tucson's continued existence and growth in a sparsely settled United States territory where many efforts at settlement ended up as "ghost towns".

When the railroad arrived, Tucson was the largest settlement between the West Coast and San Antonio with a population of 7,007. With the availability of "eastern" building materials and techniques, it was gradually transformed from a dusty, adobe "pueblo", to a modern U. S. city. The railroad brought great civic pride and the feeling that Tucson ought to have all the conveniences of other cities, so the citizens of Tucson banded together to acquire them. The Sisters of St. Joseph opened St. Mary's Hospital the year the railroad arrived. 1881 brought a system of street naming and address numbering. The next year brought gas street lighting, followed by electric lights in 1883. And in 1885, the territorial legislature authorized the state university for Tucson.

Although not for lack of trying, one thing which eluded Tucson was a street railway. There were no less than seven attempts before the establishment of the Tucson Street Railway in 1897. The first attempt was launched four days before the arrival of the railroad. After two further attempts in 1881, Tucson's civic leaders settled for public transportation in the form of a herdic line.

The Tucson Land and Herdic Coach Company was formed and began scheduled service through the city on November 16, 1881. Herdics were a form of omnibus. Both were often called carry-alls. All were horsedrawn carriages characterized by a rear entrance and longitudinal seats on either side of a center isle. Service was provided on a loop south of the city center.

It is not known exactly how long a period the herdics made their trips through the town, but it is likely that the cessation of regular service is what led to the next attempt to build a street railway in 1891. Newspaper research has failed to turn up any evidence that this attempt ever got beyond the organizational stage.

Part of the problem was the lack of a significant traffic generator at some distance from the city. Most cities which were successful in establishing streetcar lines possessed some kind of a distant attraction. In Douglas it was the smelters, in Bisbee and Warren it was the mines, in Prescott it was Fort Whipple, and in Tucson it would be the University of Arizona. 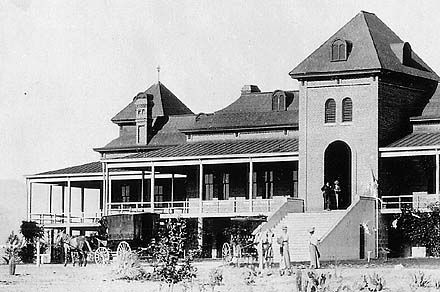 Old Main, University of Arizona, 1897
Even though the legislature authorized a university for Tucson in 1885, the first classes were not held until October 1, 1891. The university was the stimulus for serious, permanent, public transportation. Initially, it was provided by the University Hack Line and the Orndorff Passenger Work, later called the Orndorff Bus. In fact, the Orndorff Bus continued to operate after the establishment of the streetcar line and is known to have been serving the public as late as September 1901.

By 1895, the University of Arizona and the city had grown enough that additional attempts were made to establish a car line, although the first of these did not envision serving the University. In March of that year the City council granted a franchise to John M. Ormsby and Associates. They proposed a line on West Pennington and East Congress. The Arizona Daily Star hailed the effort by stating: "With a street railway, Tucson will look as if she was alive."

By the end of the month it was reported that more than half the stock had been subscribed to, and by May 11 that "all but 25 of the shares of the street railway stock have been taken". Those last 25 shares must have been impossible to sell, as that is the last reference to the Ormsby effort. On January 25, 1896 the Weekly Citizen reported: "The project is being agitated of building a street railroad from town to the university." The proposed route was to begin at the Post Office which at that time was near Main and Congress, proceed up Congress to Sixth Avenue, north on Sixth Avenue "...to the street leading to the Indian School, and thence to the Indian School and the University." This latter street could have been either Fifth Street or Third Street (now University Blvd.). This route was only then becoming possible as a bridge was just being constructed on Sixth Avenue over the arroyo north of the railroad tracks. 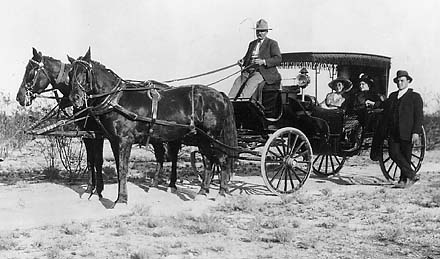 Thought to be William D. Ganzhorn's surrey
In early February, Miss Lulu May Nelson purchased 105 acres of land adjoining the university. The Citizen announced her intention to "form a splendid residence addition to the city", and "To build a car line from the city to the property". The proposed subdivision, including the route of the streetcar, was laid out and recorded late that year. In the meantime in mid March the Weekly Citizen reported that Mr. Charles F. Hoff left for San Francisco "...to investigate matters relative to obtaining streetcars...in case he and others should be granted a franchise to operate a car line..." On April 6 the City Council granted the franchise to Miss Nelson. It required that the first line be started within three months.

One would assume that no construction ever took place as yet another franchise was granted on October 2 to William P. Woods and Associates. This time the newspaper reported that "...all the money required for the building of the portion of the line in immediate contemplation is now available. Work on the line to the university will begin very shortly." Again the media was overly optimistic as no record of any construction can be found.

This tie from the Tucson Street Railway is well-worn by the hooves of the equine team which drew the streetcar. It was saved by Joe Whallen who worked as a mechanic for Tucson Rapid Transit from 1928 to 1946. The tie was photographed when the author interviewed him in 1974.