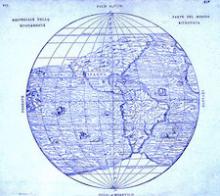 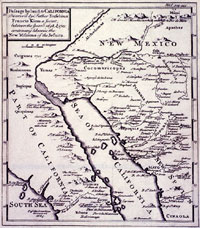 This is a 1762 engraving in English of Kino's ca. 1701-1702 manuscript map. The map was first published in 1705 in French in Lettres Edifantes..., Paris. This small map is a great monument in the unfolding of the mysteries of the West. It includes discoveries made along his overland route to California which enabled him finally to dispel the theory of California as an island. Pimeria and Sonora appear for the first time as distinct regions, as do many placenames in the region, including Mission San Xavier as "S. Francis Xavier du Bac". Tucson is located by its earlier village name "S. Augustin". The Colorado River first appears by its modern name. Six other manuscript maps of the region are known to have been produced by Fr. Kino: 1683, 1685, 1695- 96, 1696-97, 1702, and 1710. Fr. Kino (1644-1711) was the great figure of the late seventeenth and eighteenth centuries in the far northwestern reaches of New Spain. He was a Jesuit missionary assigned in 1687 to the Pimeria, Viceroyalty of Mexico, and as leader of Jesuit missionaries in that region, he labored not only to minister to the Indians but to explore and make known the land. By 1687 Fr. Kino had established missions in what is now Sonora, but the northern region between the Altar and Gila Rivers remained largely unexplored. In 1691, with Fr. Salvatierra, Kino entered what is known today as Arizona and discovered notable sites such as the Casa Grande ruin. During a 1701 journey, Kino reached the mouth of the Colorado River and proved--to his own satisfaction, at least--that California was not an island.

Herman Moll (d. 1732) was a Dutch cartographer who lived in London ca. 1680. He published numerous maps and atlases; some of his North American maps were used to support British claims in boundary disputes with France after the Spanish Succession, 1702-13.

Delisle's work begins another new era--this map is considered a "towering landmark for Western cartography" and rightfully so. Among a collection of advancements, this is: the first printed map with the names of the Colorado and Gila (as "Hila") Rivers, and to have the Gila nearly geographically correct; and the first map to accurately delineate the mouth of the Mississippi and much of the Mississippi Valley. It is interesting to note that, for all his progress, Delisle still wavers on California as an island. This is one of the earliest published maps with the printed name Pimeria and to have detailed mapping of that region. Delisle most certainly had access to one of Kino's manuscript maps, for that part of the map uses Kino cartography and placenames.

Guillaume Delisle (1675-1726) was the leading French cartographer in the early eighteenth century. He was noted for his prolific production (over 100 maps) and exceptional accuracy. He was appointed Premier Geographe du Roi in 1718.

This attractive little map is actually a pirated copy of Fr. Eusebio Francisco Kino's 1696 manuscript map. The Mexican Viceroy sent a copy of Kino's map to Monsieur Regis for the Royal Academy in Paris. Regis had the French King's official geographer Claude Delisle study it and it is probably this copy that found its way into the hands of Fer. Charles Inselin engraved it and Fer published it omitting Kino's title and summary of expeditions to California, and without a word of acknowledgement to Kino. In Kino's original, each village is labeled directly on the map. However, Fer designated the settlements by number and then gave their respective names in a special list--he made many mistakes in doing so. For example, number 100 is actually San Xavier, 99 is San Augustin, and 103 may be San Martin or Guebavi. California is still shown as an island, for Kino had not yet made his discovery expedition to the Colorado River.

Nicholas de Fer (1646-1720) was a French cartographer and atlas publisher. More highly regarded for his decoration than his geographic precision, he produced many maps of France and Europe, and, between 1700 and 1705, three major atlases.

This is another pirated copy of Fr. Kino's 1695-96 manuscript map. It is a far more artistic production and much larger in scale than Fer's 1705 version. It is also far closer to Kino's original by copying its title, reproducing Kino's summaries of the expeditions to California (translated into French), and restoring the village names to the map proper. Fer still made errors in copying Kino's work. San Xavier is shown much farther west than on Kino's original. On this map Fer acknowledges using one sent by the Viceroy of New Spain to the Royal Academy, but does not give credit to Kino. California is still shown as an island and Kino's 1701 discovery has yet to influence European cartographers. 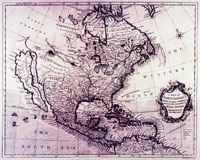 1744. Richard William Seale. A Map of North America with the European Settlements and Whatever Else is Remarkable in ye West Indies from the Latest and Best Observations. London. Map 38 x 47 cm. Scale ca. 1:19,000,000. From Paul Rapin de Thoyras, The History of England, Continued by N. Tindal. London, 1744, volume 3. [G3301 S1 1744 S4]. 1003X800 | 752X600
Seale's map has some Kino data probably gleaned from Fer's versions. However, California is still an island and the route of the Colorado River is actually that of the Gila River. Fer continues portraying fanciful details from Baron Lahontan's romantic tale of his 1688-90 travels west of the upper Mississippi River.

Kino's discoveries have now made full impact. Anville's map shows California as a peninsula and the Colorado and Gila Rivers are more accurately located. Note that the western part of the Gila River is named the "Rio Grande", the Santa Cruz River is called "Sta. Maria", and the San Pedro River is "Terenate".

Anville (1697-1782) was a leading French cartographer of the eighteenth century. In addition to several atlases, he published over 200 maps, including several of the world. His maps are notable both for their beauty and their scientific accuracy. His famous personal collection of maps was acquired by Louis XVI in 1779.

The southwest region of Cóvens and Mortier's map is a simplified version of D'Anville cartography. For western North America they were more forthright; they left most of the west completely blank, labeled "Terre Inconnues", instead of using a mythical Sea of the West as a space-filler, as on some previous maps.

Cóvens and Mortier were map printers and publishers of Amsterdam. They succeeded to the business of Pierre Mortier in 1711, and their business was continued by their heirs up to 1866. They published numerous atlases mostly using maps after Delisle, Sanson and Jaillot. 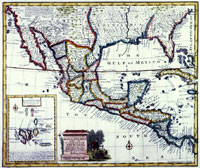 This map does not show much change from previous cartography. The western portion of the Gila River is named the "Rio Azul". The village that is now Tucson is still shown by its earlier name San Augustin. A tribute to Fr. Kino covers the area of the West for which there is still a lack of knowledge.

Emanuel Bowen (ca.1720-1767) was an engraver, printseller and publisher in London. He was appointed Engraver of Maps to George II of England and Louis XV of France, but died poor and nearly blind. 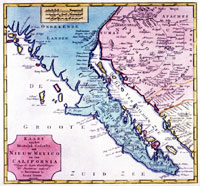 This attractive hand-colored map offers some new data, but, despite its title, does not cover the traditional New Mexico area. Tirion's information for the Pimeria region comes from Jesuit manuscript maps produced subsequent to Kino's day. The entire Gila River is now named correctly. What is known today as the Salt River is labeled "Riv. Azul". It is interesting to note that Tirion uses an old name for the Gulf of California- -"De Vermiljoen Zee."

Tirion (d.1769) was a book publisher out of Amsterdam and published at least three atlases.

This little map continues the d'Anville cartography and offers little new information. This is one of the earliest uses on a published map of the name Tubac for that village and presidio on the Santa Cruz River.

The cartographer of this rare little map is not known; however, the possibility exists that it may have been Fr. Pedro Font (d. 1781) who is known to have prepared several excellent maps. This is an important map showing the complete route--as a dotted line--of the remarkable journey of Fr. Francisco Garces (1738-1781) through portions of southwestern Arizona and southeastern California, along the Colorado River, and into the southern San Joaquin Valley and to the Hopi town of Oraibi in northeastern Arizona. The journey lasted from October 1775 to September 1777, and for about the first month, or until he reached the junction of the Gila and Colorado Rivers, Garces accompanied Juan Bautista de Anza's second expedition to California. Fr. Font was the Anza expedition's chaplain and did not travel with Garces beyond the Colorado, as the title indicates. This map is a very accurate representation of the Sonora-Arizona-California region. It is one of the earliest maps, and the oldest in the exhibit, to label Tucson by its modern name, although it is spelled "P. Tuquison". Both the San Pedro River of Arizona and the Mojave River of California (Garces' "R. de los Martyres") are correctly delineated. The river labeled "R. de la Asumpsion" is the Salt River.

The map was engraved by Manuel Villavico, and it has been suggested that this engraving was intended to illustrate a book that was never published, hence its great rarity. 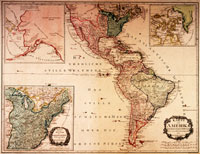 1795. Jean Baptiste d'Anville and Thomas Pownall. Compiled by Franz Johann Joseph von Reilly. Karte von Amerika nach D'Anville und Pownall. Neu verzeichnet herausgegeben von Franz Joh. Jos. von Reilly. Wein. Colored map 58 x 77 cm. Scale ca. 1:21,800,000. [G3291 S1 1795 A6]. 1041X800 | 781X600
This is an example of a commercial map from near the end of the eighteenth century. As with his other maps, D'Anville was weak in the western portion of North America; this map does not draw on the recent discoveries of the Spanish explorers.

Reilly (1766-1820) was a Viennese art dealer, map maker and publisher and is noted for several published atlases.

Pownall (1722-1805) was the governor of New Jersey and Massachusetts and created a number of maps of these regions.

Part of which site
Maps of the Pimería: Early Cartography of the Southwest