Pictures from the 2008 Reunion are being added to the Recent Updates page.

The Soza family is an excellent example of the presence of Mexican-Americans in the Tucson area for several generations, how their lives contributed to Tucson's cultural and economic history, and to their on-going love for our community. The Soza's history is one of a pioneer family that settled and homesteaded in the Sonoran Desert, and later turned to the city.

Happily, Soza family members, led by Edward Soza, chronicled and compiled a family history. Mr. Soza's first print version appeared in 1996 under the title of Arizona Pictorial Biography: Antonio Campa Soza 1845-1915. A deluxe edition containing added and repositioned photos was printed in February 1997. On October 27, 1997, Mr. Soza reported that "the U. S. Copyright Office has issued Certificate of Registration TXu 791-067 for the above title."

A copy of the Deluxe Edition has been presented to the University Library with the following inscription:

Presented to the University of Arizona on behalf of the Soza Family Reunion Committee by Edward Soza, October 10, 1997.
Finally, we thank U of A colleague and Soza family member, Norma Gonzales Lopez, for her assistance and support in connecting Edward Soza with Library staff. Norma's father, Nazario A. Gonzales, Jr., can be seen as a baby [32K] in one of the Nazario Gonzales family images. 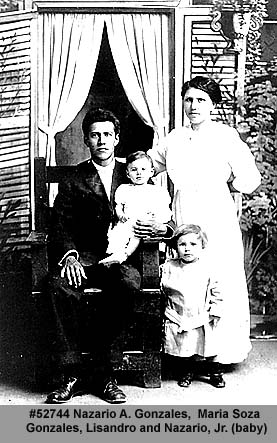 This Web version was originally created by Stuart Glogoff of the University of Arizona in 1997, with revisions to the design and images in 1999 and 2000. Ladd Keith, of the UofA's Learning Technologies Center, revised the site's appearance in June 2003 and the LTC's graphics section developed the current interface in fall 2003 accomdating this work's inclusion in Books by Edward Soza.
revised 7/7/03

Part of which site
Books By Edward Soza