as told by
Anselmo Valencia

It has been a very long time, the people say, that a band of Spanish conquistadores rode toward Yaqui territory in Sonora. These Spanish soldiers were the "white invaders" predicted by the Talking Tree many years before, in the time of the Surems. They were armed and dressed exactly as foretold by the Talking Tree.

The Yaquis gathered to meet them. One of the Yaqui leaders drew a line along the ground, knelt and kissed it reverently, saying, "Up to this line and as far as the eye can see in these three directions, is Yaqui land. No invaders will be allowed to enter." They asked the soldiers to return from whence they came

When the Spanish soldiers tried to do battle with the Yaquis, there was such fierce fighting, that the Spaniards had to retreat hastily. They had never met such valiant fighters, they said. Thus, the Yaquis drove back the white invaders, exactly as predicted, and they were well satisfied with that day's work.

Over 70 years later, some Mayos (cousins of the Yaquis) who had been converted to Christianity, came to the Yaquis and told them about the Spaniards who were peaceful and carried no weapons. The Yaquis asked that these peaceful ones be brought in, but that no armed man could enter their territory. They were converted easily because when the missionaries called their God "Our Father in Heaven," pointing upward toward the sky, then the Yaquis thought that here were others who shared their beliefs about Itom Achai Taa'a, Our Father Sun." And then, too, the missionaries' cross looked almost like the Yaqui sun symbol. The missionaries came and stayed on, converting the Yaquis to Christianity. Up to that time, the Yaquis had been sunworshipers with their own ceremonies and dances, among them the Deer Dancer, Pascola, Coyote, Raccoon, and Naji (water-fly) dances.

The Yaqui converts asked questions about the man on the cross - who was he? Why was he crucified? Who were these people that had crucified him? They took the Christian beliefs and dramatized them, acting out all the events in the Passion of Christ, Cuaresma. Yaquis were probably told that those that followed Jesus were both good and bad. Thus, they had the Matachinis, angelitos, and church group to represent the good. The missionaries allowed the Yaquis to include their own nature beliefs with Christianity. That was the only way they would have been allowed to stay. The ceremonies of the people, the Pascolas and Deer Dancer, were seen as being good.

But the evil ones were made to look as ugly as possible. The name of these evil ones Fariseos (Pharisees) is Chapayeka in Yaqui. Chapa means long or flat, and Yeka means nose, so Chapayekas are long-nosed Pharisees as the Yaquis saw the Spaniards. These evil ones take the worst punishments during Lent because they persecuted Christ. But the evil ones are given a chance to change their ways on Sabado de Gloria when Christ rises and enters heaven. 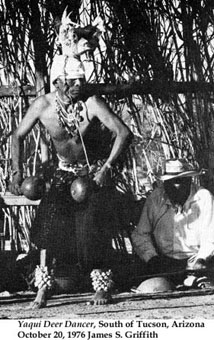