as told by
Mrs. Carmen Garcia

Some time ago there was a Pascola who, when he first started out, was a very terrible performer. He was clumsy and unable to dance gracefully. He did not even know how to chat with his audience. The people only kept him on because they pitied him. One day he was requested to dance at another pueblo, so he set out alone, the others having gone ahead.

And he stood there, listening, and wishing with heart and soul that he were more graceful.

At this point, a goat came out of the cave, a goat so frisky that it could not stand still. This one went toward the Pascola, who stood and waited for it. The goat stood up on its hind legs leaning its forelegs on the Pascola's chest, and licked the Pascola's face ‑ first on the mouth, then on the ears, and finally on the throat. He stood back and stared at the Pascola; this one waited calmly. The goat zoomed off and, turning very sharply, came charging at the Pascola, but the Pascola, with arms crossed, waited calmly. The animal stopped short, and raising its hind leg, urinated on him. Then the goat galloped off and disappeared among the rocks, and the music stopped.

The Pascola, wondering over what he had seen, continued his journey. He began to think of many good jokes to entertain the people, and his feet itched to dance right then and there. Thus, he arrived at the Pueblo, where all was in readiness. He dressed and began his entertainment when - cosa rara! - the once ungraceful Pascola danced as no one had ever done before. And he became so popular that to this date, no one has rivaled him. It is said that that goat was an enchanted Pascola. At any rate, the much-loved Pascola loved to dance beautifully at many fiestas. 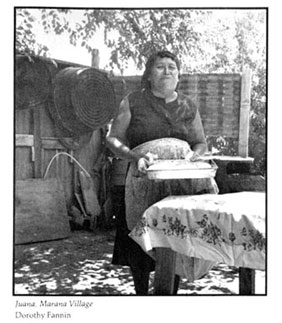 In Yaqui, tales are called etehoim. They may be told by just about anyone at anytime, but often they are told to young people by their grandparents as lessons. Yaqui writer Mini Valenzuela Kaczkurkin remembers:

Our grandparents were refugees from the Mexican government when they came into southern Arizona. They thought that their homes here were only a temporary shelter before they returned to the Rio Yaqui area in Sonora. However, the wars went on for so long that many of their temporary shelters became permanent homes for our elders. They recounted these stories among themselves as they relived the old days and ways. During a hard day's work, our grandparents would worry and wonder about their homeland, which was still in the hands of the enemy, about their Yaqui brothers who were deported to places from which they would never return, and about those true Yoemen still holding out in the mountains of Bacatete. After such a day, our grandparents would sit outdoors on warm evenings in Tucson and on ranches in the surrounding area, resting before the battle that would recover their land. Then any event - a shooting star, a streak of bad luck, a newborn child - would start off an evening of "Do you remember . . . ?" as they recounted etehoim and talked of things that happened before the wars. Their children, our parents, would gather outside along the fringes of the group to listen to stories of the supernatural, of laughter, pain, and hope, all the voices from long ago. Later, when the last battle was fought and the Yaquis were promised the return of their lands, many traditions left with them. Those Yoemen who stayed continued the etehoim, but as time passed many details were forgotten.