The earliest visitors to Sabino Canyon are believed to be hunter-gatherers of the Clovis culture. [Guide, p.2] They hunted big game, such as bison, Columbian mammoth, and other large mammals that lived in southern Arizona when the climate was cooler and more moist. Later, as the climate changed, the Cochise culture became dominant. The Cochise hunted small game and gathered edible plants. With the climate warming and water becoming less plentiful, the mountain canyon would have been an attractive place to see food and shelter. Archaeologists believe that they have correctly identified flat grindstones, called metates, stone points and other tools left behind in Lower Sabino Canyon by these people. [Lazaroff, p.80] The Clovis hunters could have come to the canyon as early as 12000 to 15000 years ago. The Cochise were most likely visitors closer to 8000 B.C.

The Hohokam became the predominant people in this area after the Cochise. The peak of their culture occurred around 1100 AD. [Guide, p.2] We are not sure where the Hohokam came from, whether they were descendants of the Cochise, or were migrants who came to Southern Arizona from Central America. The Hohokam were farmers, known for their use of irrigation systems to maintain their crops. The Hohokam built villages along Tucson's rivers and foothills. Archaeologists have found evidence of small dams west of the canyon. [Lazaroff, p.80-1] These check dams caught rainwater and soil. On the canyon floor there are indentations worn in the rock where the Hohokam ground beans. Hohokam pot sherds have also been found. By 1300 the population of the Tucson basin began to decrease, leading to the collapse of the Hohokam culture around AD 1450. No one is certain what caused the disappearance of this group: climatic changes, disease, social problems.

The Hohokam were replaced by the Pima and Tohono O'odham Indians, who still inhabit the Tucson area today. Both of these peoples were primarily farmers. They were well established, living in villages near Tucson's rivers, when the first Europeans came to this area in 1539. Padre Eusebio Francisco Kino named the village of San Cosme de Tucson and the Santa Catalina Mountains when he visited the area at the end of the seventeenth century. The Pima, Tohono O'odham, and Apache all probably used the canyon for access to water and as a cool refuge from the desert heat.
Early Tucson

Arizona became part of the United States with the ratification of the Gadsden Purchase in 1854. Bill Kirkland built a ranch house on Sabino Creek south of the canyon in the late 1850's. [Lazaroff, p.85] In 1873 this ranch was purchased by one of Tucson's wealthiest entrepreneurs, Leopoldo Carrillo. With city dwellers beginning to travel to Sabino Canyon for recreation, Carrillo intended to build a hotel and baths on the ranch property. He died without carrying out this plan, and a hotel was not be built near the canyon for another century.

In 1887, an earthquake centered in northern Mexico shook Southern Arizona. Tucson citizens reported seeing great clouds of dust rising from the Santa Catalina Mountains, the result of large boulders tumbling down the canyon walls into the valley. The results of this quake are plainly visible in Sabino's streambed today, and it is not difficult to imagine what would happen to some of the delicately balanced rocks lining the canyon walls should a similar earthquake occur today.

In the late 19th and early 20th centuries, visitors rode to Sabino Canyon on horseback, or came in horse-drawn carriages and wagons. [Lazaroff, p.88] A popular destination was the picnic grounds [SPEC] at the junction of Rattlesnake and Sabino creeks.

A dirt track lead to this area from the canyon entrance, much as the paved road leads to this area today. Beyond the picnic ground was a horse trail called Sabino Canyon Trail or Apache Trail, which led to high country. These trails were mainly used by pack animals to carry supplies to summer residents and temporary army camps, and to supply forest fighting teams. [Guide, p.3] Another popular destination was the dirt track to Lower Sabino. Congress established the Catalina Forest Reserve in 1902, which included Sabino Canyon

Col. Charles P. Sykes and a small group of associates staked claims to five gold mines near the mouth of Rattlesnake Canyon in 1892. [Lazaroff, p.90] By 1897, the group had formed the Sabino Gold Mining Company and had expanded its holdings to ten mines. The mines never panned out but the short tunnels dug into the canyon walls by this group can still be seen today.

Sabino Creek also figured into some early Tucson water-supply plans. [Lazaroff, p.93] As the city grew, citizens began to realize that they would need additional sources of water to supply the population. Many thought Sabino Creek would provide a likely source and devised elaborate schemes to deliver the water to Tucson. One plan was originally devised by a young University of Arizona professor, Sherman M. Woodward. He proposed a huge dam more than 3 miles upstream from the mouth of the canyon (1 mile beyond the current end of the paved road). Woodward moved from Tucson before he could put his plan into action. Another group, however, adopted his idea and formed the Great Western Power Company. By 1907, this groups' plan had grown to include a second dam in Bear Canyon, and a system of pipes and generating stations to supply both water and electric power to the city.

Fortunately for current Sabino Canyon visitors, these plans collapsed because of disputes over water rights, and a drought which showed that the reservoir would have been nearly dry had it been built. [Lazaroff, p.95] The dams were never built. One visible reminder of this period of the canyon's history, however, is the trail on the eastern slope of the Canyon wall. The Plat Rail Trail had been built to carry men and materials up to the site of the proposed dam. By 1912, a telephone line had been strung beside it. The trail in now called the Phoneline Train, and you can see the remnants of poles and wire today, along with an uncompleted diversion tunnel which penetrates 125 feet into the canyon wall.

The 1930's brought improvements to Sabino Canyon. Tucson's citizens now envisioned a large dam at the canyon which would provide a great lake capable of supporting boating, fishing, camping and other recreational activities. [Lazaroff, p.95-7] The lake would be accessed via a winding road that would cross Sabino creek nine times over stone bridges. In the fall of 1934, the Emergency Relief Administration had crews in the canyon to build the new road beyond the old Rattlesnake Canyon picnic ground. By fall of 1935, 4 bridges had been built. The Works Progress Administration then assumed responsibility for the project, building the remaining bridges and laying the road up the wall of the canyon to approach the proposed dam site. When the WPA 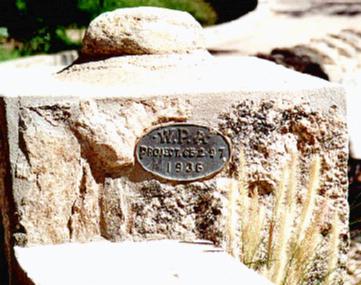 In June of 1937, funding had still not been secured to build the proposed dam in Upper Sabino Canyon and the road project was halted. [Lazaroff, p.99] The ERA's crews turned their attention to building a smaller dam in lower Sabino Canyon. The tiny lake formed by the ERA dam was enormously popular with Tucson's citizens, providing opportunities for swimming and fishing. Today the dam is still one of Sabino's most popular attractions, although the lake has long since been filled in with silt and plant life. The shaded, shallow pond and water falling over the small dam are frequented by picnickers, birdwatchers, and hikers. By 1940, the facilities in Upper and Lower Sabino Canyon were completed. 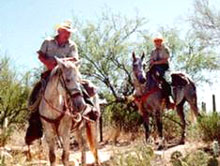 Sabino Canyon continued to grow in popularity over the next decades as Tucson's population grew. The Forest Service constructed the road into Lower Bear Canyon in 1960, and a Visitor's Center in 1963. [Guide, p.3] Eventually, overnight camping and private cars were banned in the canyon. A shuttlebus service began in 1978 to replace private cars. [Lazaroff, p.101] Today, locals and tourists take this narrated excursion to reach popular swimming areas in the upper canyon as well as to learn more about the natural history of the canyon.

Currently, Sabino Canyon has over 1 million visitors every year. Facilities continue to be improved, through the efforts of the USDA Forest Service and a local service group, the Friends of Sabino Canyon.