In the Sonoran Desert of southern Arizona one hundred and fifty years ago, the streams that we now know as dry washes, such as the Santa Cruz and the Rillito, ran as clear streams with grassy banks and were lined with many kinds of trees and bushes. In the dry season there might not be much more than a trickle of water; but then, as now, during one of the two yearly rainy seasons, the summer chubascos -- which many call the monsoons -- came, bringing rain and wind storms with heads of water racing down the river beds, building up force and sometimes carrying with them trees or anything else in their path. The usually more gradual winter rains, the aquipatas, send water down the washes in gentler fashion. Enough rain fell year round that, soaking into the undisturbed river sands, water was close to the surface near the rivers, though farther underground as the land rose.

Lining all the riverbanks were great stands of mesquite, with these trees sometimes reaching 60 feet in height and with trunks a foot and a half or more in diameter. Intermingled among them were the elderberry, hackberry, walnut, cottonwoods, ash, many bushes and low shrubs, and grasses. After the river ran high, the land was often marshy. 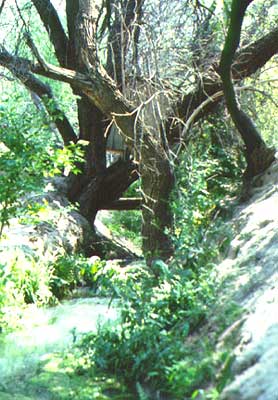 These were the mesquite bosques [30K] [WD1] lining all the rivers. They were homes for multitudes of birds and animals.

Although we do not surely know, the gravel laid down by the rivers tells us that two thousand years ago the rivers from the mountains joined together and watered the valleys. Now the Pantano and the Tanque Verde washes join together to form the Rillito, which flows on to the Santa Cruz, to the Gila, to the Colorado, and into the sea at the Gulf of California.

Perhaps along these rivers the people of the "Desert Archaic" lived nine thousand years ago, for their arrow points have been found in the Santa Catalina Mountains. Certainly a people called the Hohokam built their towns and villages not long after the birth of Christ. By 250 A.D. the archaeologists have found that they built houses, made canals to water their fields, fashioned pottery, and raised their families. All along the Santa Cruz, along what the Tanque Verde and past where the Rillito begins, there was water for agriculture. The banks were lined with the mesquite bosques, full of game such as deer, javelina, cottontails and jackrabbits. Quail, doves, hawks, and many other birds built their nests. Reptiles abounded. There were fish in the streams. In the desert nearby, and up in the mountains, were black and grizzly bears, desert whitetail and mule deer, wild turkey, Arizona gray squirrel, bighorn sheep, mountain lion, wolves. There was a rich supply of wild foods for man and beasts in bosque, desert, and mountain. Though "desert," it was not too difficult a place in which to live.

And the Hohokam lived here in this neighborhood which, from a later occupation, we now call Old Fort Lowell. The Hohokam lived beside the running water where the Fort was later built -- their pottery is found in the adobes used to build the Fort. So far as we surely know, the Hohokam were the first sedentary occupants of the area. They formed a village community extending in all directions from the center, in the area that we now call the Hardy Site. Right under Fort Lowell Road, archaeologists found the remains of homes, thanks to a huge ditch dug in 1984 to install a large water line.

From carbon 14 dating, we know that the Hohokam had their pithouses [17K] [MM1] here by 300 A.D. and lived here, developing and changing their culture, until about 1450 A.D. At that time they disappeared, for what reason no one knows for sure. Perhaps it was drought, perhaps epidemics? The scientists keep wondering -- why did they disappear? Where did they go? Perhaps the Tohono O’odham, the Desert People (before known as the Papago), are their successors, their descendants.