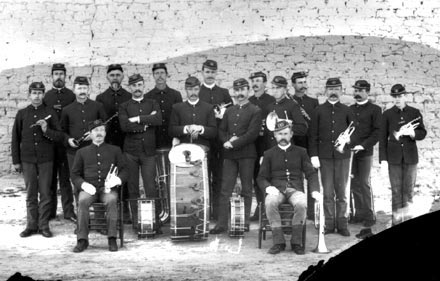 These ruins are remnants of the southwest comer of the band barracks. The barracks had several uses during the Fort Lowell years. It did, as the name implies, house various regimental bands stationed here, and it also served as barracks for the enlisted men.

When not filled with men, it was stuffed with clothing, supplies, food and fodder to relieve the overflowing commissary storehouses across the road. And finally, in the last years of the Fort's occupation, it was reincarnated as a cantina. Enlisted men and their officers could toast to good health with light wine and beer and enjoy an evening's entertainment.

After the Fort was abandoned the building served as the Díaz family home, until they moved to a house they built further to the west. The ruins directly to the east are the cavalry company quarters.