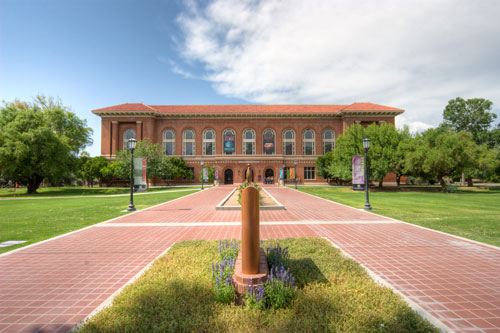 The Board of Regents decided to run the university by a committee until they found a replacement. The committee was composed of three deans - Francis C. Lockwood, Gurden M. Butler, and D.M. Working. The Regents soon discovered that a committee couldn't administer anything, except perhaps design an elephant with a tail at both ends, and so in the spring of 1922, April 22, members appointed Lockwood as president pro tem. He served until September 1 of that year when Dr. Cloyd Heck Marvin, dean and assistant director of the University of California at Los Angeles (UCLA) was appointed, President of the University of Arizona.

Marvin was reported to be the youngest university president in the United States – at age 33. He soon angered a portion of the faculty by telling the Board of Regents that the faculty "constitution" was "inadequate" and that 48 departments should be reduced to 28. He produced operational charts. He also questioned the reappointment of 12 members of the faculty and urged the Regents to accept six new faculty members who he said were educators of distinction. Marvin had made for himself an uncomfortable and fiery bed and his five years in office must have been a headache for him. Newspaper stories of the conflict which arose about Marvin are vague as to the charges against him, other than his views of changes in the administration. He was progressive in his views and, so, he attracted enemies.

Mrs. Evelyn Jones Kirmse, then Evelyn Jones, was Dean of Women at the UA from 1929 until 1942. She also served as a member of the Board of Regents from January, 1951, until January, 1959. She was an assistant Dean of Women at Georgetown University, Washington, D.C. in 1927, when Marvin became Georgetown's president. Marvin had resigned as President of the UA under fire. Mrs. Kirmse became a friend and admirer of Marvin.

She had this to say of Marvin and the University of Arizona Library: "The Library was finished in 1927. That was under Dr. Marvin's presidency. He was largely the sponsor of it, being egged on by Miss Estelle Lutrell, who at that time was the librarian at the university.

"Dr. Marvin took great pride in that library. He also took a lot of criticism because people thought he was spending too much money. The cost of the library, nearly $475,000, was a lot of money in the 1920's. And it is ridiculously small compared with what that type of building would cost today. It was fancy. It still is - marble and gild and brass. Marvin left the University of Arizona under a cloud and parts of that cloud are still circulating around. He had to go. The circumstances were such that he had to resign. I knew him before I came here because I worked on his staff at George Washington University, which was his presidency after he left here.

"He was a little upset when I decided to leave his office and come to the University of Arizona. Upset in the sense that he didn't want me to go. I was going to come back to his old battle ground, and I was going to hear all of those things that his' antagonists circulated about him. It was sort of pathetic one morning just before I left. We were in his office and he reached down into the bottom drawer of his desk and pulled out a beautiful photograph of this library. He handed it to me and said, 'You will find when you get to Arizona that I did leave something of value there.' "

Mrs. Kirmse would not go into the details of the ruckus surrounding Marvin's tenure. She said that religion was not at the core of the issue, although some rumors have held that to be.

"If religion got into the picture," Mrs. Kirmse said, "it was no doubt because of the Rev. Ernest Tuthill, who was rector of Grace Church. He was very, very active in bringing Marvin down. I'm sure that the church itself was not involved. There were people in his church that were pro-Marvin and anti-Marvin. I think Ernest Tuthill's involvement in this was personal. There is no question that Marvin stepped on some toes. He was a very smart man with big dreams about what he wanted to do. He was quite young, you know, and he thought much too fast. He was not satisfied to gradually develop. He was a right-now person.

"If he thought that professor X was not contributing to the grand plan, then he would get professor X out of the way, which is not the way you do things, in the academic world, and he developed a great antagonism among the faculty here.

"But about the library. It should have been called the Marvin Library. "

From 1919 to 1923, Arizona had a Republican governor, Thomas E. Campbell, but in 1923, former Gov. George W.P. Hunt was reelected. Hunt resumed his building program for higher education and in 1924, the Legislature appropriated $190,000 for a new library, which in the end was to cost $474,691. Supplemental appropriations were not unanticipated and were made.

Ground for the new library was broken immediately following the first appropriation. The Dean of the College of Agriculture, J. J. Thornber, ploughed a rectangular furrow marking the foundation's lines. (His wife was a professor in the VA Art Department.)

The architectural firm of Lyman and Place was selected to design the building. It was the last university building that Lyman was involved in, leaving in 1924 to return to San Diego. The Arizona Daily Star attributed "the architectural work on the building" to Roy Place. Lyman's work was contributory at best.

The building was constructed in two units with Clinton Campbell, of Phoenix, contracting for the first unit and Herbert F. Brown, of Tucson, contracting for the second. The library was and still is one of the state's most beautiful buildings. In 1979, it was listed in the National Register of Historic Places.

The College of Architecture describes the library's design as "Renaissance Revival." It notes that the large arched windows, two stories high, stretching from the second to the third floors, were unique on campus. It also notes the terra cotta detailing and that it has a steel frame and that reinforced concrete was used. The college also pays attention to the Spanish-style roof of tile.

Books were moved into the library in September, 1925, and students began using it, although the interiors were not completely finished. Students loved the building, but were miffed when they found "no smoking" signs in the outdoor study-patio.

Formal dedication ceremonies were held in the afternoon of October 23, 1927, in the outdoor reading room and patio. Former UA President von KleinSmid was the dedication speaker.

(President Marvin had resigned and Cummings was an interim president. Marvin served as president of Georgetown University until he became President Emeritus in 1958. Cummings was in office from February 1, 1927, to June 30, 1928. He was dean of the College of Liberal Arts when he was appointed to the chief position. The student newspaper, the Arizona Wildcat, said when Cummings stepped down that "he has done an almost superhuman job.")

At the dedication, von KleinSmid said, "The library is the most essential of all the campus institutions." He said that he had" dreamed of the library while president of the UA" and that "dreaming, thank God, has never been a crime in Arizona and never shall be."

Without taking any credit for the library from Marvin, it is likely that von KleinSmid did more than "dream" and that he had spoken to Gov. Hunt some years before of the necessity of such.

Dr. Cummings said, "Libraries are the greatest treasure house of every civilization." He said the new library "is a monument to the efforts of Miss Estelle Lutrell, librarian, and those of Dr. Cloyd Heck Marvin, president of the UA at the time the library was constructed in 1924 and 1925."

Roy Place spoke briefly of his work in the planning and designing of the building. He gave credit to Miss Lutrell, past presidents of the UA, the Board of Regents, the Legislature, and the construction firms involved.

In a story on campus buildings in the March 31, 1934, edition of the Arizona Daily Star, the writer said,

"One of the finest buildings on campus is the library ... It is modern renaissance in design. It is a three-story structure of red brick, covering a ground area of 195 by 110 feet. The reserved book room and the outdoor reading room adjoining seat 150 persons. The main reading room on the second floor including the alcove for periodicals and special collections, seats 200. The steel stack room affords space for the shelving of 225,000 books and affords space for further expansions. "

Earlier, the Star called the large upstairs reading room "an attractively-decorated room with massive chandeliers and tinted walls." The university's first librarian was Professor Howard Hall, who joined the faculty in 1891. He established the school's first library in the southwest corner of Old Main. A new library and museum building was accepted in 1904. It was a one-stack library. The library and museum is now the A.E. Douglass Building.

Under UA President James Byron McCormick, 1947-51, Librarian Frederick Cromwell charged that the previous administration, under President Alfred Atkinson, 1937-47, had been derelict in its attention to the library. He said that the U.S. Bureau of Education's budget figures called for five per cent yearly to build an adequate library. As a result, the library budget was increased.

This developed into a clamor for a new library which was to come later, under the UA presidency of Richard Anderson Harvill. In 1935, under a Public Works Administration grant, offices were added to the north side of the Place-designed library. Place and Place designed stack additions in 1951 and 1963 with the Sundt Construction Company the builder. Air conditioning was installed in 1948-49 at a cost of $39,076.61. Under Harvill, in 1951, Place and Place designed an addition at a cost of $246,000. In 1977, when the existing campus library was occupied, the old library became a part of the Arizona State Museum.

The old library faces the extension of the city's University Boulevard as it runs into the campus eastward. It is the first building on the left after entering the campus through the west gate. The Library faces south. The Legislature appropriated $25,000 in 1903 for the first library building under the presidency of Frank Yale Adams. It was completed in 1904 under President Kendric C. Babcok and was accepted by the university in November, 1904. Architects for the building were Russell, Muran, and Garden, of St. Louis. In those days most construction was done by labor supplied by the university and it is likely that university-supplied labor built the building, although Rosewell and Graf were the contractors. In 1929, the library was extensively remodeled for use by the College of Law. A Department of Law was established at the UA in the 1915-16 year. Four years later it was made the School of Law and in 1925 the school was promoted to the College of Law by legislative act under President Marvin.

UA President Dr. Homer Shantz selected Roy Place to redesign the library in 1929 for the College of Law. A complete remodeling was designed by Place, and Arnett Construction was the builder. Cost of the Place reconstruction was $58,700. In 1948, an addition was designed by the firm of Place and Place, after Lew Place joined his father in partnership in 1940. It served as the Law Building until 1959 and became the Psychology Building and Liberal Arts Annex in 1961. A new Law Building was built in 1960 at an original cost of $670,252. In March, 1980, the old library was named the A.E. Douglass Building.