The Men's Gymnasium (Bear Down) 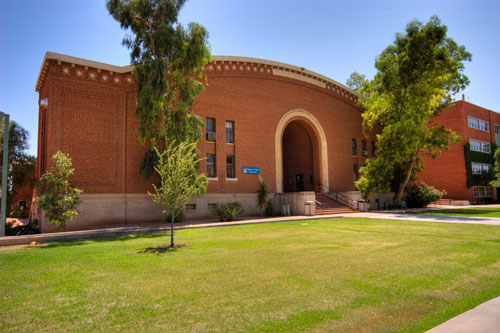 "Bear Down," the Men's Gymnasium, got its name from a piece of apocrypha adroitly manufactured by UA Athletic Director J.F. (Pop) McKale.

Douglas D. Martin repeats the tale in his book, "The Lamp In The Desert." Martin was too good a historian and a newspaperman to have subscribed to it. Anyway, here is the story:

"Back in 1926, John Byrd Salmon was quarterback on the University of Arizona football team, catcher on the Wildcat baseball nine and an outstanding student. Early in the gridiron season, on October 2, 1926, 'Button' Salmon overturned his car returning from Phoenix, rupturing his spinal cord, an injury which attending doctors knew would result in death before many days had passed.

"Near the end - Button died October 18 - Athletic Director J.F. McKale went to pay a last visit to the courageous Salmon, who knew that he had not long to live. Salmon faced death as he did everything else - with a stout heart. " 'Have you any message for the team?' McKale inquired of Button. He looked intently at the dying youth.

"'Any message?' asked Button, gazing at McKale. 'Tell the team to bear down.'"

The story has been pooh-poohed by many who knew McKale.

The athletic director was a great story teller and many of his friends insisted that he had invented the "Bear Down" tale.

One friend recently said that ol' Pop must have been lost in the hospital, wandered into the maternity ward and overheard a doctor telling a client to do just that - bear down. At any rate, it is a good story and continues on. The words are painted on the roof of Bear Down Gym and are the basis of a UA fight song. The university itself used the tale in radio and television advertising to promote the 1985 Centennial Year.

The gymnasium architect was Roy Place and the builder was Clinton Campbell, of Phoenix. It was completed in July, 1926, and cost $166,207.15. It was used as a dormitory for cadets in the Naval Indoctrination Training School from October, 1942, to December, 1944. When the Navy departed, $8,052 was spent on repairs to the inside of the structure and to the athletic field. When first erected, the gymnasium's basement was used for a "Military Department."

The College of Architecture describes Bear Down as the "last gasp of dying classicism." It is loosely categorized as classical because of its symmetry, surface patterning, strong statement of base, its parapet with implied entablature and the regularity of its fenestration - windows and other outside openings.

Dr. Cloyd Heck Marvin was UA president when the gymnasium was completed. He had met with the student body for the first time in Aggie Auditorium on September 7, 1922, and the Arizona Wildcat newspaper remarked that "he looked more like excellent material for Coach McKale's football squad than a college professor."

In the same issue, the Wildcat called upon the president to press for a new gymnasium and athletic field as well as for other new buildings. Marvin succeeded except that an auditorium and science building that the newspaper asked for did not come until federal money from PWA was made available during the depression.

Lew Place tells two stories about or concerning Bear Down:

"The main floor of the gym where they played basketball was designed for a 50-pound live load. It had steel joists under the floor and a basement under that. The only exit from the spectator area was the main entrance that led off into two stairways opposite each other and up to the balcony. All spectators were supposed to sit in the balcony, and it held 1,500 persons.

"Pop McKale, the athletic director, came down to Roy Place's office one day and was screaming bloody murder at Roy in his humored way. He said that the gymnasium didn't have enough exits. He said we can't get those people out of there and if there was a panic, it would be terrible. Roy said, 'Well, you can only get 1,500 people in the gym.' McKale said, 'Oh no, we have five or six thousand.'

"Roy and I looked at each other and Roy said, 'Where are you putting them?' "McKale said, 'On the gymnasium floor in collapsible bleachers. ' "Roy swore. He got into his car and went out to Bear Down, saying that it wasn't designed for that load. 'You're way overloading it.'

"So we drew up some details for four new exits at the four corners to the main floor and put stairs there so the spectators could get out. Roy said, 'If it holds up now, it'll hold up later, so I guess we don't have to do anything about the load. '

"As far as I know, the floor was never strengthened. Roy apparently subscribed to the old philosophy that if it's working, leave it alone."

Years later, after Roy Place's death, before the new main library was built just north of the stadium and to the east of Bear Down, Lew Place was conferring with Dr. Harvill, the UA president, and Dickie Houston, Superintendent of Buildings and Grounds.

"We were talking about the proposed new library and I made a suggestion. They had an idea for the new field house (McKale Center) to the east of the east stadium. Bear Down would be vacant. The gym would have made a good library and the Science Library just west of Bear Down would have been perfect for the stacks. We could have just put the stacks inside. All the stacks are pre-fabricated, the floors and everything. I suggested that the two buildings - the Science Library and Bear Down - could have been tied together for about half the money, plus the addition of another building to the east.

"Dr. Harvill turned it down and hired another architect (Friedman and Jobusch) for the new library. That was just one of several times that Harvill told me that if I didn't stop trying to sell them on an idea, they would be getting another architect and that one of the buildings was the McKale Center. "

Lew Place didn't get the new library, but was appointed architect for McKale. That was the last building he designed for the University of Arizona.

In 1929, Roy Place designed a swimming pool on the south side of Bear Down gym. The pool was 60 by 75 feet and was built by Orndorff, contractor. In 1954, heating was added to the pool. It was abandoned in 1975 and in March, 1978, the radio-television station at the university installed an antenna in the abandoned pool. It still rests there.

Bear Down gymnasium is located on the south side of the campus mall. It faces north and is across the mall and slightly east of the present Administration Building.