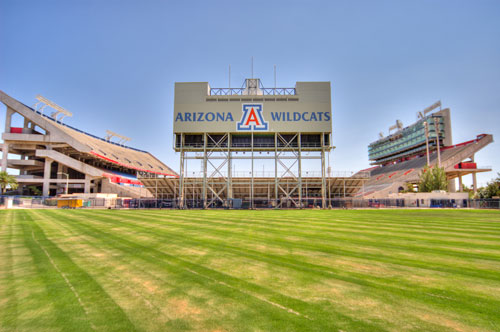 In 1921, under the administration of President Rufus B. von KleinSmid, a Board of Athletics Control was established at the University of Arizona. The board was composed of a full-time graduate manager and representatives of the student body and the faculty.

Not long after the board had its birth, former football players Orville McPherson and Kirk Moore appeared before it with a suggestion that a football stadium be built for the UA. According to Douglas D. Martin, they "were a trifle early, but the seed they planted lived to produce today's stadium."

An 8,000-seat stadium was completed in 1929 in the good old prosperous years. Roy Place was chosen as the architect and Orndorff Construction Co., of El Paso, won the builder's contract through the lowest bid.

Lee Orndorff and his brother were the owners of Orndorff Construction. The firm also owned the Orndorff Hotel in Tucson. They hired Tucson contractor J. F. Garfield to oversee construction, an onsite clerk of the works.

The stadium, the West Stadium of today, was to grow with Roy Place as the architect. Total cost of the West Stadium was $166,888, in its original form. In 1931, the first floodlights were installed so that the football team could play under the lights in more comfort from the fall's still hot daytime weather and so that more Tucson fans could attend the games at night. The lights required 10, 60-foot poles with four reflectors on each pole at a cost of $4,800.

In 1949, a press box was erected, designed by the architectural firm of Place and Place at a cost of $14,080. In 1965, Lew Place designed an "upward expansion" of the West Stadium, adding 10,600 seats at a cost of $1,401,317. The total outlay included a new press box, which provided a handsome seating for the football game newspaper reporters and radio announcers.

Lew Place states: "Dr. Richard A. Harvill, president of the UA at the time, insisted upon having a separate room in the press box with overstuffed chairs and a bar and kitchenette for him and his guests and he got what he wanted. We called it the Harvill Hilton. "

Earlier, the football field was located in a low area where the old Administration Building and the Chemistry Building were later situated. That was on the south side of the present UA mall, to the southeast of Old Main. The football field ran north and south and there were wooden bleachers on the west and east sides. The UA team once beat USC and that is where the teams of the university acquired the name of "Wildcats." A newspaper report said the UA team that beat USC "fought like wildcats."

The College of Architecture describes the style of the stadium as "an art-deco form." In 1927-28, Tucson alumni were hard at work raising funds for the new stadium, for which the Legislature provided nothing. The Legislature was interested in providing education for future mining executives, and a few sidelines, but little else. Football was a frill.

It was during that school year that the Board of Regents approved Roy Place's designs. He had projected the stadium in four units for future years. Wisely, the Board of Regents had purchased two blocks of land at Sixth Street between Vine Street on the west and Cherry Street (now abandoned) on the east.

The field itself would be 212 feet wide, including a circular running track and would be 1,002 feet long. Dormitories in the East and South Stadiums were foreseen by Roy Place. The fields to the north would provide practice areas for the freshman football squad on the west and for the varsity football squad on the east. To the north of the practice fields would be the baseball field and stadium, on the site of the present UA Library.

A fund campaign for the financing of the West Stadium was opened in 1927. It was designed to seek monies for the construction from the alumni under the direction of President Byron Cummings, who served as acting president from February to May, 1927. The West Stadium was built under the presidency of Homer LeRoy Shantz, who served from 1928 to 1936. Leader of the Alumni fund drive was Louis Slonaker, who at the time was Alumni Secretary as well as Graduate Manager.

The Board of Regents had stipulated that the alumni must raise $100,000 toward the stadium's cost before any contracts would be let. Shantz, when he took over as president on July 1, 1929, had used as his theme, "We must pull together."

The overall fund-raising team pulled together. Its chief was Dr. E. P. Mathewson, Dean of the College of Mines (an intended choice); and Coach J. F. McKale, football coach; Slonaker; William Bray, Superintendent of Buildings and Grounds, and President Shantz. The alumni, faculty, and students gave $25,000 toward the building of the stadium, but that was not nearly enough. It was then left to Mathewson, a former employee of Anaconda Copper Company and an expert on copper smelters, to put the act together and the fund over the top. He was requested to contact the copper companies of Arizona for their donations. The companies came through.

Later, the Board of Regents decided to enclose the back side of the West Stadium at a cost of $40,000. It would provide space for the Departments of Art, Drama, the Arizona State Museum, and the Arizona Pioneers Historical Society.

Wooden bleachers were soon purchased for the east side of the playing field. Land on the football field was leveled and turf was planted after six inches of soil and fertilizer were laid. Such work was expensive and when the field was completed the Athletic Department found itself $20,000 in debt.

The big event of the year 1929 for Tucson and the University of Arizona was Homecoming Day in October. This was the dedication day of the new stadium. The UA football team defeated the California Institute of Technology 35 to 0, and everyone seemed to think that the UA team played better when the fans were comfortable. The development of the remainder of the stadium will be covered later in this report.