The Arizona State Museum was completed in December, 1935. Roy Place was the architect and J.J. Garfield was the contractor. Cost was $88,000. It, like the other "PWA" buildings, was financed by federal grants and loans to the state. Some alterations were made to the building's front entrance in 1962 at a cost of $7,133,84. The building is still used as part of the Arizona State Museum. 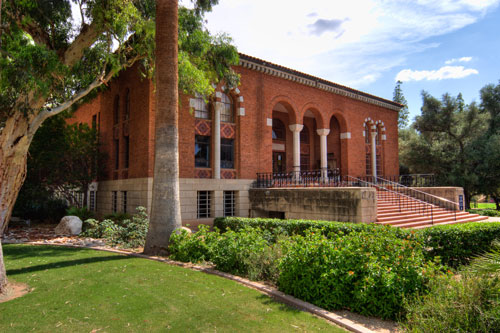 Arizona State Museum North was established across the street in the old Library, on the north side of the street, in 1977 after the new Library was built and occupied. The original museum is the first building on the right after entering the west gate to the campus from University Boulevard. It is used as part of the museum and a part of the Anthropology department.

Lew Place recalls the building of the museum's foundation:

"Back in those PWA days, all the buildings had high concrete foundations. These were from 13 to 16 inches thick. Almost all the buildings in those days, incidentally, had masonry-bearing walls. When Garfield built the museum, it had a very high foundation and inside the form he put triangular strips of wood to make it look like joints in a granite wall. That's what Roy designed it to look like, like it was stone masonry. Incidentally, bearing walls on the campus are usually brick, about three bricks wide, or 13 inches. Where you have a pier or a truss, there will be a wider space for the pier. To carry the load.

"But back to the foundation. At that time, they had a material they sprayed or brushed on the form work so that the concrete wouldn't stick to it. They stripped it - took off the forms - after the concrete had set.

"On the State Museum, when we stripped the forms we found the material that kept the concrete from sticking to the wood had tiny little bubbles in it. There were small pock-marks all over the outside of the foundation wall. I was scared to death because in those days they had to take big abrasive stones and hone down the concrete and put on a little wet cement and make it smooth.

That was called architectural concrete. Here were all these little holes all over and it looked exactly like it was stone and not concrete. Natural stone like tufa stone. 'And so from that time on, we never honed or brushed on any concrete walls.'"