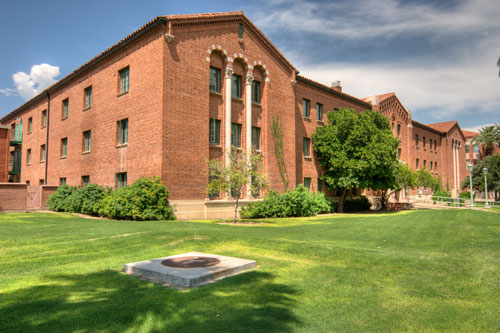 Yuma Hall and Gila Hall were two women's dormitories built under PWA. Yuma Hall was designed by Roy Place and J.J. Garfield was the low bidder. It was completed in July, 1937, and cost $251,467.

It is located as the third building east of Park Avenue and fronts on North Campus Drive to the south.

Mrs. Evelyn Kirmse was Dean of Women at the time and tells the following anecdote:

"I'm sure that you do know that one way to build a building is to have the architect design it, draw the plans and write the specifications. Then a call for bids from contractors is made.

"The next step is to get the bids and realize that you don't have enough money for the lowest bid so you go back to the drawing board and start all over again, to see where you can cut spending. I've had plenty of experience with that.

"Two of the buildings that I was involved with were Yuma Hall and Gila Hall, which were women's dormitories that had already been planned and started before President Burgess took office. He (Burgess) was not enthusiastic about spending money for women's dormitories because his complete love was doing things for the College of Agriculture (of which he had been Dean.) On more than one occasion he said to me that he didn't see why they wanted to spend as much as $150,000 to build a dormitory when all that money could be used for Ag.

"So there was some question about changes in the plans for the plumbing. The original drawing had not included any complete bathrooms. There were shower rooms and toilets but we didn't have any tub baths. Some of us felt that there were occasions when we really would need them and at least one bathroom should be put in each dormitory providing a tub. And that meant of course - as you say in journalism - some editorial changes. And the plumbing bill was going to go up and we had enough trouble already making adjustments in costs. Billy Bray was in charge of all buildings and grounds, in fact his title was Superintendent of Buildings and Grounds.

"He telephoned me one day and asked if I could come over to Yuma Hall, the site of Yuma Hall. The walls were up and the roof was on. He said he wanted to discuss some changes there and your plumbing. He said Roy Place would be there and Prexy was coming. The president at the time was Dr. Burgess.

"So I went over there. I remember standing in front of the building and discussing what we had to do in the way of changes. We got to the matter of plumbing and Dr. Burgess couldn't see any reason to spend any more money on the plumbing. Then he turned around to us and said, fervently, 'You can't tell me there's any girl on this campus who needs to take a bath more than once a week. '

"Billy Bray began to laugh. I was aghast. And Roy had a funny expression on his face. He didn't know whether to laugh or say anything.

"So Billy Bray, who had a good sense of humor, turned and said to Burgess, 'I hate to tell you this, Prexy, but some of these girls take more than one shower a day, especially when they come home from the athletic field. '

"But we got our bath tubs and we all thought it was wonderful!"