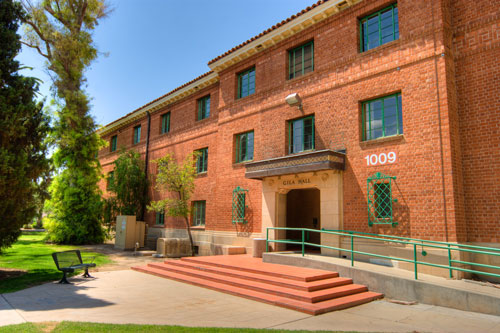 During the interview with Mrs. Evelyn Kirmse, former UA Dean of Women, she was asked if there had been any problems with Gila Hall, perhaps similar to the problem of the bath tubs in Yuma Hall.

"Not with Gila Hall," Mrs. Kirmse said. "But with Paul Burgess again. He was UA President."

"The Adminstration Building - what we now call the Nugent Building - was built in the mid-1930's with PWA money. I was supposed to move my office in there because my office was in a cottage on the site of what is now Yuma Hall. I really needed three rooms, one for my secretary-receptionist - that was the public waiting room; I needed a room for my assistant and one for myself. My assistant and I did a great deal of business with students that was confidential. So we couldn't very well share a room, send one of us out while the other was having an interview. I agreed that we would try to get along with two rooms, but I didn't know how we were going to do it.

"Anyway, I was assigned space in the new Administration Building. In education, in student relations, at that time were two schools of thought. Some people thought that the Dean of Women's office should be in the administrative group of offices, in order to bolster the administrative rank of the dean. To take away from the dean's office that old stigma, at the turn of the century, that the Dean of Women was a matron type, not an educator.

"I belonged to the opposite school. I didn't think that idea as important as the dean being located where it was easiest for the students to get to her. Students don't congregate or go voluntarily to administrative offices, and I believed that my office should be, as it had been, in the students' very path. And I hadn't wanted to go over there, really, but there was nothing else to do.

"Burgess called me one day and said that we are changing the plan of the Administration Building. He said Slonie (Louis Slonaker, Director of Student Activities) needs more space. So we're going to give one of your rooms to Slonie. I said that I wouldn't go over there under those circumstances. He asked why. I said that I couldn't operate with only one room because I would have no place for confidential work and you can't have students sitting around listening when you are talking with another student.

"He, Burgess, threw up his hands and I threw up my hands and I said, 'I think the answer to this, Dr. Burgess, is that you don't care whether you have a Dean of Women or not. You are not settled on the idea of how my work can be efficiently done.' "And then he did throw up his hands and asked, 'What are you going to do?' I told him that I didn't care where he put me as long as I had space in which to operate. He asked me what I suggested and I said to him to take some of the space in Gila Hall and put me over there. He asked, 'What do you want to be in that dormitory for?'

"I said that I knew the layout of the plan for the building and that I could operate there, where I couldn't operate under the situation that he had described.

"So what we did was change the plans for the east end of the first floor of Gila Hall. We put an outside entrance to the corner rooms and I then had three rooms. It worked very, very well."

Gila Hall was the last major building constructed under PWA, although the greenhouses were the final construction of the project.

Roy Place was the architect and P. S. Womach, of Phoenix, was the contractor. It was completed in the fall of 1937.

Gila Hall and Yuma Hall were of the same basic design but Gila Hall cost $215,205 while Yuma Hall cost $251,467. Perhaps the bath tubs that President Burgess was "forced" to install in Yuma Hall made the difference?

Burgess resigned as President of the UA in the spring of 1937, two weeks before commencement exercises. He had recommended that Dr. Alfred Atkinson, President of Montana State College for 18 years, be named to replace him. The Board of Regents accepted Burgess' resignation and his recommendation at the same time and reappointed Burgess as Dean of the College of Agriculture.

Atkinson graduated from Iowa State Agriculture College, did graduate work at Cornell, and received his doctorate in Science from Iowa State following. He remained at UA until 1947.

Gila Hall is located on the north side of North Campus Drive, faces south, and is the first building east of Park Avenue. It is located on the site of the President's residence, which was demolished to make way for Gila Hall.

Lew Place tells one anecdote on the tearing down of the president's residence. The president's house was built in 1893. The plans came from the Co-Operative Building Plan Association, New York. They were modified by the UA's first president, Theodore B. Comstock. Some improvements were made in 1923.

"I was working for my father, Roy, at the time and was the inspector of the job. When I fell down, I fell to the ground on the outside and lay there half covered with bricks. They started pulling the bricks off me and the labor boss kept saying, 'Mister Lew, Mister Lew. You all right?' And some of the others said, 'Let's pull him out of there.'

" 'Don't touch him, don't you touch him,' the labor boss said. I said, 'Hell, I'm all right, just take those bricks off me.' " Lew Place must have been accident prone, but he wasn't injury prone.