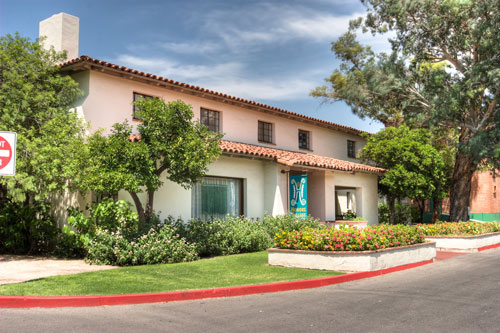 (Now: Slonaker Alumni Building) In 1929, Evelyn Jones Kirmse came to the University of Arizona as the Dean of Women. She had been on the staff of Dr. Cloyd Heck Marvin at Georgetown University, Washington, D.C. Marvin had served as UA President from 1922 to 1927.

In 1932, Mrs. Kirmse attended a meeting of the National Association of Deans of Women held in Detroit. The University of Michigan, at Ann Arbor, was one of a few institutions of higher learning which had gone into cooperative-living dormitories for women. Mrs. Kirmse visited the campus at Ann Arbor and got some ideas that led to the establishment of a cooperative for women at the UA.

As a result of the visit, a student women's cooperative was established at the University of Arizona in what was then called Pima Hall. It was originally named North Hall, a men's dormitory built much earlier.

Pima Hall in those depression years was a boon to the crimped finances of the women students. Mrs. Kirmse said, "The girls did everything. I have been given too much credit." The year was 1933. Mrs. Kirmse said in a taped interview, "Billy Bray (UA Superintendent of Buildings and Grounds) gave me $150 to buy what I needed to furnish the kitchen. I had to get a refrigerator, but I didn't need a stove. We had a stove. I had to get eating tools, dishes and pans and that sort of thing. I went to Steinfeld's and bought a lot."

She said that during the depression as far as food was concerned, "The girls were getting enough. They were getting all they needed. Because all the menus that we used in that building, when we started, were overseen by the people in home economics, by the dieticians over there. The girl who was the house manager was a home economics major. That's why we picked her as house manager. "

From 1937 to 1947, Dr. Alfred Atkinson was president of the University of Arizona. A Canadian, Atkinson had been president of Montana State College for 18 years. He graduated from Iowa State Agriculture College in 1904, then joined the faculty at Montana State. Shortly after arriving at the UA, Atkinson called Mrs. Kirmse and notified her that the girls in the cooperative Pima Hall would have to move. Their building was to be used for classrooms by the BPA College.

In Mrs. Kirmse's words: "He meant that the cooperative unit would be abolished. We then prevailed upon the administration to permit us to rent a building in order to continue the operation. And we rented a building on Euclid Street which belonged to Mrs. A. H. (Arthur Hamilton) Otis, who was the wife of the Dean of Men at the time. We operated the cooperative unit there for two years. "

In 1939, Dr. Atkinson telephoned Mrs. Kirmse. "He asked if I could build a building to care for those girls for $40,000. I told him, 'You get the money and we'll do it.' So he said all right, you go ahead and start planning. "I called my secretary in. She was Patience Wilson, sister of Bumps Tribolet (alumni secretary). I said, 'Pat, we're going to get money to build a new Pima Hall. Don't make any appointments for me until we get going on this.'

"I got out a T-square and a ruler and a lot of pencils and we started to work on the floor plans. By that time I had worked enough with other buildings to know that if my building, for example, was going to be fifty feet long, I couldn't use all that space for living. I had to allow for utility passage. So we got the plans. I took them down to Roy Place, who was given the commission to design the building. He turned them over to James Macmillan (head draftsman for Roy Place at the time). Of course there were adjustments and changes. The girls came in with ideas and the architect put in their ideas which were better than mine.

"I had drawn a front elevation which was like a New England salt box. Macmillan said, 'You don't want that. That's ugly.' And I said, 'But it is cheap and we have to get in within the $40,000.' He said, 'Oh no, we're going to have to have a little tile on there.' So he added tile and a porch and provided for the decorations and then we got talking about the patio and everything. But I made the basic floor plan." (Lew Place, not yet a partner with his father in the firm, also worked on the plans. It was the first architectural work he had done.) Mrs. Kirmse was asked if she knew where Dr. Atkinson got the $40,000 for the new Pima Hall.

"I don't," she said. "I never knew where he got it. They can legally use money left over from other buildings for a legitimate purpose. And it might have been something like that but he never told me. I was so glad to get the money I didn't care where it came from." Pima Hall was not built of the traditional brick that Roy Place had used before. Lew Place explained why:

"It was surrounded by residential work. There was no expectation at that time that the university was going to expand in that direction. It was a Spanish-style residential building." Warren Moon added during the interview: "That was in the area where there were fraternity and sorority buildings. It was a residential area.”

"Yes," Place said. "It was like a big sorority house. It was to blend in with the rest. "The new Pima Hall was completed in 1940 at a final cost of $47,999. No one could explain the odd figure. P.W. Womack Construction Co. was the builder.

In 1979, Pima Hall was remodeled into the Slonaker Alumni Building at a cost of $135,356. It now houses the alumni office and the University News Service. It is located on East Second Street, the second building on the left as one enters East Second off Park Avenue. Pima Hall was a victim of its era. There are now no cooperatives on the University of Arizona campus.

The Arizona Daily Star, on May 31, 1979, reported some lamentations over Pima Hall's demise. Old residents remembered the fun times - panty raids by male students; raiding the refrigerator and the accompanying punishments such as getting spanked on bare bottoms; telescopes peeping into bedrooms from nearby male domiciles.

By 1979, all of the fun seemed to have gone. The star reported: "Today, housemothers are often graduate students, girls can stay out all night and there are no dress rules ... Through the 1960's girls could not wear slacks to the dining room for dinner or curlers at breakfast. Grace was sung before meals. One waited to leave the table until the head resident finished eating, put down her napkin and stood up as a sign the meal was over. Often, there were songs before eating ... Dinner isn't sacred anymore. It was just dinner ... The girls don't sing anymore. In fact, they abolished the position of song leader recently. They couldn't believe the old songs in the piano bench ... The concept is dying out."

Mrs. Kirmse, the founder, was quoted in the article as saying: "Maybe the need for this type of thing has died with the times. It was a great thing while it was."