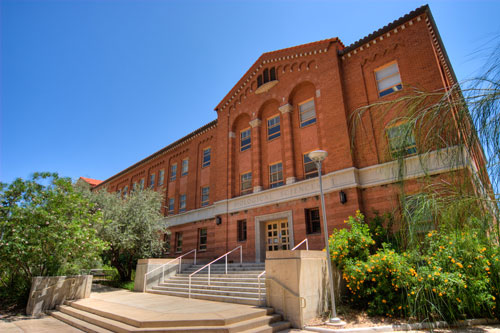 Construction of the Biological Sciences East Building was completed in 1956. It was designed by Place and Place and was built by the M. M. Sundt Co. at an original cost of $1,100,497.

The animal quarters to the west were built in 1958 for $108,761. Place and Place were the architects and J. A. Binns was the contractor. Binns made alterations to the Biological Sciences East structure in 1967, designed by Place and Place. Hilro Construction Co. made $42,204 in alterations and in 1977, "Space Modifications" were made at a cost of $35,922.

Biological Sciences East is the first building on the west side of Highland Street, just north of Fourth Avenue. The structure was designed, first, by Roy Place a number of years before it was built. It was re-designed by Lew Place and built after Roy Place's death.

Warren Moon recalls that the wife of the Dean of the College of Pharmacy, Willis Ralph Brewer, was an interior decorator. She chose the colors for the interior of the building.

"I can still remember on the final inspection that Lew Place and Dickie Houston, Superintendent of Buildings and Grounds, came into the building and suddenly saw those colors. I thought the two of them were going to have apoplexy. The colors were pinks and strange oranges. I guess they remained."

Moon said that he and Howard Deming, inspector for Lew Place, were at the Biological Sciences East Building looking at a terra cotta cap that was being placed on a parapet. "I said to Howard that it simply didn't look right. I can't figure out what is wrong with it, but it just doesn't look the way I would expect it to look.

"We didn't tell Jim King, a subcontractor to Sundt, who ran a masonry operation," Moon said. "But we did tell the masonry foreman and they went out and on Friday afternoon, took off the terra cotta and faced it properly."