Although nearly overcome with fatigue, everyone was cheerful and full of courage. We then arrived at a ranch. The man offered us the bar-room to sleep in; but we said we preferred the stable. He replied, "There are 40 men in the stable." Six of them gave us their places, and in the twinkling of a eye we were fast asleep, and did not wake until 7 o'clock a.m. We then saw the strange place we were in -- 40 men, sure enough! and as many Indians. Nevertheless, they all treated us with the greatest kindness and respect. The weather was extremely hot and we were so sorely fatigued that the driver advised us to remain until evening.

After breakfast he carpeted the stable with a wagon cover; then brought in some rocks and feed sacks for seats; thus we were very comfortably seated. There was a man there whose life I had been instrumental in saving. From the manner in which he spoke, I think he recognized me. He was extremely kind to us, procuring for us such delicacies as the place afforded. He gave us some fresh eggs for our journey. We left there at 6 o'clock p.m., and traveled until 8 o'clock -- only two hours. We wished to go on, but the driver insisted on our remaining where we were. Of course, we had to submit. Sister Euphrasia and I remained in the wagon, and the other Sisters rested themselves on a pile of straw. At midnight we resumed our journey. 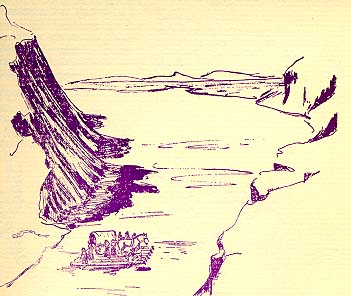 About 7 o'clock we left Lower California, and entered Arizona; we crossed the Colorado River about 9 o'clock, on what they term here, a tow-boat, which, however, is nothing but a raft. We were obliged to go over in the carriage as they did not wish to cross over a second time; having two spirited horses, two men held them by the bridle; and, as there was nothing on the opposite side to which the rope could be fastened, two men stood on the opposite bank, holding it with ropes.

As the horses sprang forward, the raft floated back. At this, one of the horses fell on the raft, which is the only thing that saved us from a watery grave. The weight of the horse prevented the carriage from rolling into the river. There stood the carriage, with the Sisters, hanging over a depth of 17 feet of water. I saw the danger before it happened, and jumped from the carriage. We merely escaped being drowned and ending our mission, and finishing our crown before reaching Arizona.

But our Lord did not wish it -- we must labor longer, and assist in cultivating this barren portion of His vineyard. At 10 o'clock we reached Arizona City or Fort Yuma, where we received a most cordial welcome from good Father Francisco, V. G., of Tucson. We remained here three days, and had the inexpressible consolation of assisting at the Holy Sacrifice and receiving our dear Lord in Holy Communion, which imbued us with renewed strength and courage for the remainder of our journey. We had the pleasure of hearing a Spanish sermon for the first time. We were lodged with a good Mexican family.

As some of our Sisters may be going there at some future day, a brief description of the place may not prove uninteresting. It is located at the junction of the Colorado and Gila rivers, being much more conveniently situated than Tucson. It is said to be the hottest place in the United States, but has the advantage of having plenty of fresh water. Sand storms are of frequent occurrence. The population, consisting of Mexicans and Americans, numbers about 4,000; the latter having the majority.

No schools have yet been established. They offered $200 per month if two of the Sisters would remain for a year, but were told by Father Francisco to first build a convent. The majority of the buildings are of adobe (sun-dried brick). Lumber is very scarce and difficult to procure. There is but one Catholic church. The first pastor, who was one of the priest who accompanied the bishop to Carondelet, was appointed last May (1870). The soil is fertile; but owing to the continual drought, agriculture is confined to those parts where irrigation is practicable. There is an almost inexhaustible supply of firewood. The Indians in the vicinity are peaceable.

We left this place at sunrise and traveled until noon. The remainder of our journey was quite pleasant, having a comfortable, covered carriage, good Father Francisco to guard us, a plentiful supply of provisions, etc., and a cook to prepare our meals. From this time forward we had our regular meals -- very good ones, too -- far better than we had expected in such a wilderness. We had a tent to sleep under, but as it was rather small, some of us slept in the wagon on the seats. We traveled until 10 o'clock p.m.

We started early in the morning and stopped at noon, on the banks of the Gila. We traveled 200 miles along this stream and took supper at a ranch, where we remained during the night.

When we were about to resume our journey, Mother started in advance of us for a walk. On coming to a place where the roads crossed, she took the wrong direction. After a short interval, not perceiving any traces of her, we became alarmed for her safety. Father and Sister Ambrosia immediately started in pursuit. When the driver descried her in the distance, he ran as fast as possible in order to overtake her and she, on perceiving a man running after her, and not recognizing him, ran too, with all her might.

After her return, Father put her in penance, by making her ride in his carriage. Sister Martha accompanied her. At 6 o'clock a.m. we resumed our journey and May 20 we came to a ranch about noon. The proprietor treated us very kindly, and presented us with some canned fruit and a new towel for our journey, which we resumed until 7 o'clock p.m., when we camped for the night, suffering much from cold.

We started on our way at 4 o'clock a.m., and passed many recently made graves of persons who had been killed by the Indians. One of these, we were informed, contained the remains of a father, mother and five children. 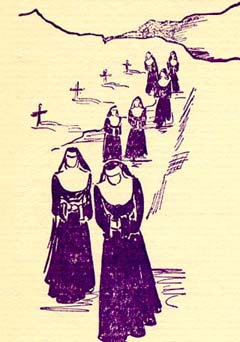 These burial places looked so sadly neglected; the wolves had even made holes in them. The desolate, lonely places in which these poor creatures were laid to rest, and still more, their melancholy and frightful death, cast a damper over our spirits, as we had no certainty of not meeting the same fate. And yet, why should we be sad? Did we not risk our lives for the love of Jesus? And would it not be glorious to have the happiness of dying for Him ? But poor nature is weak, and although in spirit we coveted the privilege of so glorious an end, yet our frail, earthly bodies shrank from so trying an ordeal.

We passed at night the Indians' place of worship. It is a natural construction of huge, immovable rocks, on which they have cut the figures of their gods. There were various planets, different animals of the forest and even reptiles. The figures appear to be well made, and are quite interesting to look at. Oh! how my heart burned to make known to them the true and only God! We camped about 8 o'clock, and took our supper by brush light, as usual.

Part of which site
Trek of Seven Sisters