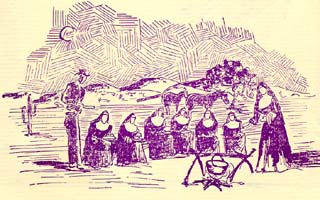 We had a lamb this morning for breakfast; we called it our Passover. After offering up our prayers and placing ourselves with renewed confidence under the protection of Heaven, we resumed our journey at rather an advanced hour of the day under the rays of a scorching sun, the average heat in the shade being 125 degrees. We reached a ranch at noon and were accommodated with a room where we enjoyed the luxury of a "good wash and change of clothing," a refreshment of which we were sorely in need.

We dined at 3 o'clock, and after getting a supply of fresh water for our journey, we started at 6 o'clock p.m. We entered the Arizona desert, traveled all night, and were so much fatigued, that almost everyone fell asleep, the driver permitting the horses to go at will. Father and his driver slept so soundly that Sister Martha was obliged to drive nearly all night.

At 8 o'clock a.m., we refreshed ourselves with a cup of coffee, and traveled on until 2:30 p.m., when we were out of the desert. We took dinner at 5 o'clock p.m., and lodged at the house of a generous-hearted Irishman, Mr. Cosgrove. Whenever we had the good fortune to come across Irish or Mexicans, we were sure of meeting with a cordial reception, and of finding in them all the characteristics of true friends.

We started early, entering upon the most dangerous portion of our journey, as we were in danger of being attacked and massacred by the savages at any moment; but placing ourselves in the hands of Providence, to whom we had consecrated our lives, we courageously advanced, feeling assured that His all-seeing eye would protect His chosen ones from danger; at all events, that whatever might befall us would be in accordance with His most holy will.

When we stopped at noon, there was no room for us in the inn, so that we had not even a tree to shelter us from the burning rays of a tropical sun. The ruins of some old buildings were near; Mother went there to rest, and fell asleep. A troop of nude Indians came in the meantime, who are peaceable. They had the consideration to be quiet and let her sleep. Sister Martha was resting on an old cowhide. A noble warrior perceiving her, stole softly up and sat down beside her as her Guardian angel.

Valley of the Pimas

The remainder of the Sisters were in the wagon, while I employed myself in washing our stockings and handkerchiefs, and amused myself by taking notes for my "Journal." Father and the boy prepared dinner, after which we resumed our journey. About 4 o'clock p.m., we passed through the valley of the Pima Indians. Their dwellings are constructed of straw, and are shaped like a bird's nest in an inverted position; they vary from four to five feet in height, and have a small hole as a place of entrance.

Their costume consists of two pieces of calico or flannel, extending to the knees, one piece hanging in front, the other behind. The young squaws are clothed with the inner bark of trees, in the same manner. The "old ladies" are not so modestly attired; they dress their hair with a mixture of mud and water, which has the double effect of destroying the vermin and keeping their hair in its place. They are a brave-looking tribe; very unlike the poor, timid Indian of the frontier. 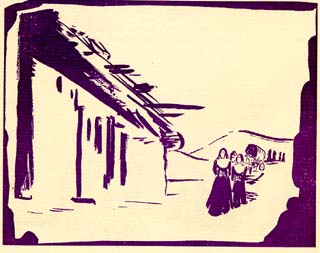 We camped at 9 o'clock. Whilst partaking of our evening refection, sixteen soldiers rode up and informed us that they had been sent to escort some travelers, they knew not whom, and supposed we were the persons, as they saw no others. We conjectured that our good Father, St. Joseph, had sent them to our assistance; although at the time we were not aware of how much we stood in need of their escort. We might, in all probability, have been massacred by the savages, had they not been our safeguard. The Indians are afraid to appear when they hear the soldiers, unless they are sufficiently strong in number to fight them. They continued with us for the remaining seventy-five miles of our journey.

Whilst at breakfast this morning, three of the citizens of Tucson, who were a portion of the number appointed to meet us (the others having remained at the next station) rode up. We resumed our journey at 5 o'clock p.m. Some miners joined us, in order to share our protection. The soldiers followed close in the rear; they had two mules to carry their baggage -- one carried the blankets; the other the cooking utensils. We titled them respectively, the "chambermaid and cook." The latter looked quite amusing with her pots and pans hanging from her side. 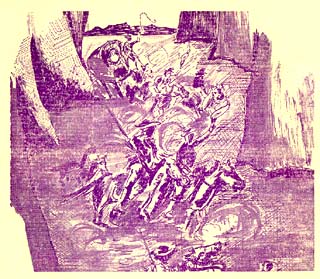 At noon we reached the station where the remainder of the escort from Tucson was awaiting us -- sixty-five miles from the city. There was great rejoicing among them; but as they could not speak either French or English, we did not understand them.

At 5 o'clock p.m., we set out again. Everyone was in fine spirits; especially the citizens. All passed off pleasantly until midnight, when a serious turn of mind and manner seemed to take possession of each and every one. We were then approaching Picacho Peak, where the Apaches are accustomed to attack travelers. A fearful massacre had been perpetrated there, only a week previous.

The road winds through a narrow pass in the mountain, where the Indians conceal themselves, and throw out their poisoned arrows at the passers-by. The place is literally filled with graves -- sorrowful monuments of savage barbarity. Each one prepared his firearms; even good Father Francisco. The citizens pressed around our carriage. The soldiers rode about like bloodhounds in search of prey. In passing through the peak, the horses began to neigh, which is a sure indication of the close proximity of the savages. "The Indians! The Indians!" was echoed from every mouth. Whip and spurs were given to the horses -- we went like lightning -- the men yelling like so many fiends, in order to frighten the savages. The novelty of the scene kept us from being afraid. We traveled in this manner until 4 o'clock a.m.

When having passed, unharmed, through the most dangerous portion of our route, we returned fervent, heartfelt thanks to our good God, for our preservation. After refreshing ourselves with a cup of coffee, we continued until within fifteen miles of Tucson, when we stopped for a short rest.

The citizens desired us to remain there all night, as they wished us to enter Tucson in daylight, where a grand reception was in preparation. After considerable reasoning, they became very enthusiastic over the matter, but Father finally succeeded in obtaining their consent for us to enter that night. Four men went in advance, with the joyful tidings of our arrival. We were expected about 6 o'clock p.m.; and were afterwards informed that the ladies and children had stationed themselves on the housetops, being too modest to mix in the crowd with men. 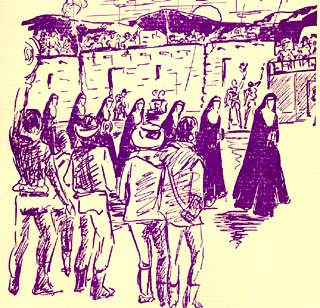 At about three miles from the town we were met by the procession which was headed by four priests on horseback; but as we came in sight, they dismounted, and ran rather than walked, to meet us; the crowd, in the meantime, discharging firearms. Before we reached the city, their number had increased to about three thousand; some discharging firearms, others bearing lighted torches; all walking in order, and heads uncovered. The city was illuminated -- fireworks in full play. Balls of combustible matter were thrown in the streets through which we passed; at each explosion, Sister Euphrasia made the sign of the cross.

All the bells in the city were pealing forth their merriest strains. On reaching the convent we found our good Bishop in company of several ladies and gentlemen, awaiting our arrival.

We feel truly grateful to these good people for their kind reception, as it is a convincing testimony of their reverence of our holy faith. The Bishop conducted us to the dormitory; one of the priests brought us some water, and, after arranging our toilet, the ladies ushered us into the refectory where a nice supper had been prepared for us. 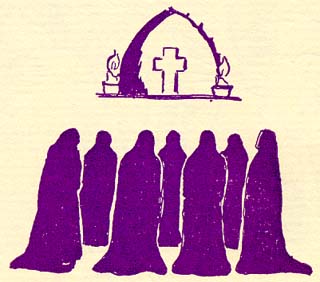 When we had finished our repast, they departed, leaving us in quiet possession of our new home: "St. Joseph's Convent, Tucson, Arizona." Our first act was to return thanks to our merciful Lord, to our dear Mother, Mary, and likewise to our glorious Patriarch, St. Joseph, for preserving us from the many and great dangers to which we were exposed for the love of Jesus and the salvation of souls.

Now, that we are settled in our new home, we trust our good Sisters will continue to pray for us; recommending the success of our missions, our schools and our own spiritual welfare, to our dear Lord, to the end that we may labor earnestly to promote His greater glory, and have this, alone, in view, in all our undertakings.

Sister Monica of the Sacred Heart

Part of which site
Trek of Seven Sisters