Investing in the Community

As young historians, we are specifically profiling a few locally-owned businesses-past and present-to show that they bring money in and put it back into the community. The Westside neighborhoods need businesses like these to increase their economic value in the next ten years.

In the 1880s, most structures in Tucson were made of adobe; this was an abundant material for homes in the desert. In1908, however, Quintus Monier founded the Tucson Pressed Brick Company (TPBCO) south of Congress and west of the Santa Cruz River. By the 1920s Tucson real estate development began to boom. Neighborhoods began to spring up and automobiles allowed people to commute. With the boom, brickyard businesses began to pick up. Monier's TPBCO faced competition from two other Westside brickyards-DeVry Brickyard (approximately where Dragon's View Restaurant is today) and Grabe's Brickyard at St. Mary's and Grande.
(Source: Allison Cohen Diehl and Michael W. Diehl, "Building Tucson in the Nineteenth and Twentieth Centuries," Archaeology in Tucson: Newsletter of the Center for Desert Archaeology, Summer, 1996)

"My grandfather, Augustine Romero, was the foreman for the DeVry Brickyard Company for twenty years.... In the early sixties, when I was a kid, I used to walk with him along the river at night to the brickyard....He had to make sure that the brick ovens were the right temperature and that the fires hadn't gone out...I remember it smelled real good, like clay."
(Danny Romero, 7/14/97)

"My father, [R. Jacquez], was the foreman for Grabe Brickyard.... Sometimes after a building was up at the University, my Dad would take us kids in his truck and drive us over there, and he would say see that building? and [we] would say yeah and he would say I built those bricks."
(Lupe Jacquez, 7/15/97) 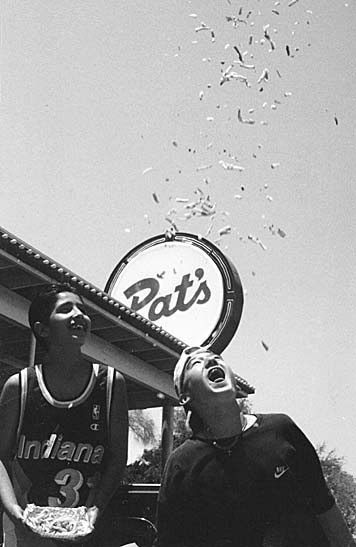 [Pat's was established by a man named Henry Patterson in 1955. At the time there were three Pat's around town. Now there is just one on N. Grande at W. Niagara in Barrio Hollywood. Pat's has helped the Westside by giving employment to young Hollywooders and other area kids. Carlos Hernandez, known as Charlie by most, is the current owner. He first started at Pat's in 1965 as a general employee, peeling potatoes and onions. In 1979, the business was offered to him and he jumped at the chance. He is now successful with his business and says, "This is the best crew I've ever had."

Charlie feels that Westside economy is growing a lot. He also feels the crime rate is going down because he sees less violence, less drug deals. Future plans for Pat's include possible expansion while making sure to maintain its "original" look.
(Carlos Hernandez, 7/3/97)

Tañia's: The best deal in town

Tañias Restaurant was started by the Lira family in 1983. The mother of Rudy Lira -- the current owner-began by making tortillas and selling them. Tañias has created a special reputation with its affordable prices and deals. Tañias is the only place in Tucson that sells soup and gives twice as much for a dollar more. Tañias has also kept its prices the same for over seven years. Tañias is also dedicated to giving back to the community. They give out coupons to "most improved students." Also, city volunteers get two-for-one deals. Rudy feels that the business is going in the right direction but is nowhere near where they want to be. Presently they are open from 5:30 a.m. to 8:00 p.m. Their current goal is to be open twenty-four hours. Tañias is doing a lot of things right. They're known all over Tucson and have "the most competitive prices in town."
(Rudy Lira, 7/9/97)