The entrance of the United States into the Vietnam conflict marks the resurgence of nose art after its abatement at the end of the Korean War. While the Vietnam war spanned the period from 1965 to 1973, nose art had a shorter lifetime, 1967 to 1970 (Ethell, p. 150). Besides stricter regulations than in the past, units had less planes, ruling out any possibility of one pilot to a single airplane. Personal identity with the aircraft was not as strong, as a result (Ethell, p. 152). An exception was the 355th division in which individual aircraft were assigned to pilots, and "excellent nose art, maintenance, and morale" were the result (Ethell, p. 153). The tradition continued, but with some modifications.

There was a different character to the Vietnam War from previous wars and a changed attitude in American society. The personal commitment to the country's cause was often absent, both at home and on the front. This was reflected in the art, whose message centered not on the foe, but rather on the people at home. Some examples of the new themes are "Peace Envoy," and "The Silent Majority" (Ethell, pp. 149-150). Compare these names with "Spirit of '44," a B-17G of the 91st Bomb Group, named for crew's high hopes upon entering World War II (Davis, v. 1, p. 10). The art from the Vietnam era, for example "Protestor's Protector," recorded the public's negative attitude towards the war, even more than in Korea. Sometimes the attitude was shared by the combat troops, whose painted protest signs replaced patriotic messages (Davis, v. 3, p. 6). Indirect protest occurred in the number of works with a morbid theme, such as "The Negotiator," with the image of a skeleton in top hat and white gloves, and another with the image of the grim reaper. Death images were not new--they appeared in previous wars as well--but set in the time and place of Vietnam, the images carry the weight of irony. More often, the art avoided the subject of the war altogether with short catch phrases of the day, cartoon characters (Snoopy replacing Bugs Bunny), music, television, and the movies as subject matter. 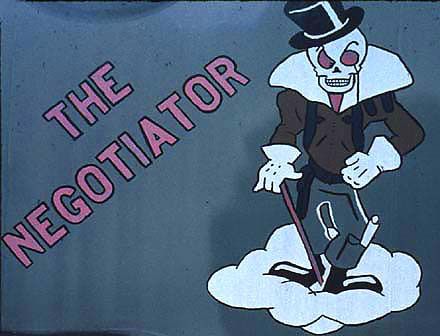 There was a noticeable shift from an emphasis on female nudes to rock music, reflecting the country's changing attitudes about women in society. A pilot from the era believes that the change was due to the increase in the education level of the pilots, most of whom held graduate degrees, and their higher age, which averaged thirty-two years. More mature men were interested in naming their planes after their wives, children, or girlfriends rather than a movie star or a model (Ethell, p. 155).

Heavier military regulations against all nose art in general, and sexually-oriented art in particular, caused not only a thematic shift, but a decline in nose art overall. Nose art may have been overlooked by officials in past eras, but in the Vietnam period a more conservative mood governed the military. In 1968, the mood was set when General William Momyer, commander of the 7th Air Force in Southeast Asia, ordered the shark mouths to be removed from the first F-4Es deployed. It has been suggested that the regulation only encouraged more innovation in the application of art (Ethell, p. 153). In July of 1970, a 7th Air Force directive outlawed all individual markings. The urge for self-expression could not be suppressed, however, and, although complying with the order to remove art from the fighter bombers, pilots moved their nose art to the nose gear door, where it was less visible. In one instance, the order was ignored until the announcement of the visit of the USAF Chief of Staff in November (Ethell, p. 158). 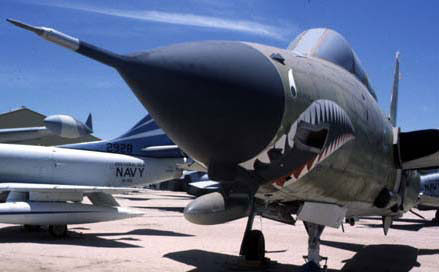