Estela Dalton has lived in Barrio Anita all her life. She attended Davis Elementary, right across the street from her house, which is the only home still standing on her block. Ms. Dalton's house is also right next to the Barrio Anita/Davis garden. 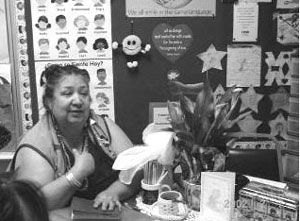 There were three kinds of gardens back then. There was the medicinal and herbal garden, where they had the romero, the hierbabuena, the lemon balm, the lemon mint. They had the orégano, they had the ruda. I can't tell you what the name of that in English is, and that was for earache. They would crush the leaves, put it in olive oil, put that in a cotton ball, warm it up a little bit, put it in your ear. You slept with it overnight, and some people would even cover the ear with a handkerchief. So you slept through the night with it stuffed in your ear. The following morning you would wake up without an earache! I'm telling you right now, it was good!

Anyway, most gardens had the herbal and medicinal garden, and then they had the vegetable garden. Most people planted vegetables that were hardy, like the peas, string beans, okra, pickles, 'cause a lot of people did their own pickling. They pickled their own pickles. They pickled the okra and tomatoes, of course, and onions, the green onions, and the brown onions. I heard that somebody in the neighborhood had potato plants. That was really awesome to see them, picking the potatoes, you know, because they're a root. Beans, they had beans in their vegetable gardens. There was a whole bunch of swapping—if you had planted something and the neighbors didn't, you could swap them for whatever you didn't plant that year. So nobody was hungry.

Then there was the third garden, the flower garden—the roses, the sweet peas, succulents, all the variety of flowers. It was so cool, because back when I was a kid, we used to have May Day. But it was through the whole month of May. We had rosaries every day to honor Our Lady, Mother of Jesus Christ. Half an hour or forty-five minutes before we went to church to say the rosary, we all got our little baskets, and we went house to house, gathering roses, gathering carnations, lilies, whatever the neighbors were willing to give us. They would cut the flowers for us, and we'd put 'em in baskets. And here we were, dressed in our little white dresses, with our little veils. We'd go to church and offer up flowers to her. They were recycled throughout the rosary, because at each mass we would take flowers to lay before her feet. So that was really cool, because you would be going to church, and you would have all these jasmine, succulents, smelling the roses, the carnation, everything. Sometimes some of the women from the neighborhood would make flower crowns. So we would all go; we would take our veils off and go with our crowns. We were glad we had crowns.

But there were three kinds of gardens. And every house had them, almost every house. Usually the flower gardens would be either in the front or at the side, around the house. The vegetable garden would be way in the back yard, and the herbal/medicinal garden would be close to either the back door or the window.

The kids weren't malicious. They wouldn't go around tearing up everybody's gardens, you know? I think the worst thing that we had was kicking the dogs out of the garden, and the cats. But there was no maliciousness, like I see now. We have two gardens, and I've seen them go up and tear the fruits and vegetables. You know, no respect. That's what I see a lot of today. Which was not so back then.

Everybody that had gardens also had chickens. Some people had rabbits. Some people had pigs in the back yard. That was a daily, normal, animal thing. The chickens were not pets; the rabbits were not pets. People had goats, people had pigs. And they weren't pets because we knew we were gonna eat 'em eventually, some of us. We had turkeys. Mean! (Laughs.) Turkeys are mean! They will attack you! Some women had geese in their gardens. But they're a little bit more negotiable than the turkeys. Turkeys are mean.

Part of which site
Huellas del Pasado… Footprints from the Past