Aran Canally is a fifteen-year-old student at Tucson High School. Last year Aran worked on the first volume of Barrio Anita history, “Visions of Barrio Anita, Looking Through the Eyes of Different Generations”, as a photo editor. Aran will use the experience he has gained from this book and apply it to help him go to college and get a graphics job.

April Cruz came to this program to work with other people and to learn the responsibility of working on a book. Born and raised in Barrio Anita, April knows about her neighborhood and would like for others to know about it. Her future plans are to attend college and study law and work in the juvenile court system.

Fernando R. Cortez worked on last summer's book “Visions of Barrio Anita, Looking Through the Eyes of Different Generations” as the map editor, and now is the editor in chief of this book. He has been a resident of the Barrio Anita neighborhood ever since he was born. Fernando brings his experience, positive attitude, and leadership to the second oral history project. He will use the advice and knowledge that he has received from his co-editors, and Mike Burns in the second book, “Walking Through Barrio Anita’s History” to help him achieve his goals in life. Fernando's future plans are to attend Pima College and the University of Arizona and go on to law enforcement.

Veronica Encinias is a sixteen-year-old senior at Tucson High Magnet School. Veronica’s job for our project is copy editor. Her job is to ensure that all text is spelled correctly and grammar is correct. Veronica brings her enthusiasm and ambition to learn to our project. She has outstanding editing skills. She was intrigued by the elders’ stories and always wanted to hear more. Veronica’s future plans are to finish high school in May of 2000, attend Pima College in the fall, and eventually become a crisis counselor for women and children.

Alex Heredia is a Tucson High School student and is in his second year working on these books. He was involved with this program last year on the first book, “Visions of Barrio Anita,” and wanted to continue working on the book for the second edition. Alex came to this program ready to continue his experience and help out. He brought to this project, his bilingual skills and experience from working on the first book. His future plans are to finish school and pursue a career in computer technology or graphic design.

Frank Augie Lopez is a fifteen-year-old Sunnyside High School student who plays soccer and made the varsity team as a freshmen. Augie was ideally interested in Barrio Anita. His position as project manager consists of making phone calls for our team and controlling our planning budget. Augie is also responsible for the financing and expenses. Augie says he loves working with our group. He also mentioned that when he has completed his work for the day he enjoys helping others from the group. Augie envisions sports in his future. He plans to play soccer for the University of Arizona and after college would like to play for the Major League Soccer. He feels this project has given him some inspiration for the future.

Oscar Madrid is a fifteen-year-old student at Pueblo High School. Oscar is involved with the mariachi group, Estrellitas de Oro, as a vihuela player. He brings his experience from working on the first book as well as his enthusiasm, laughter, and his talkative personality. Working on this project has helped Oscar improve his social and computer skills, and given him great experience for future jobs. Oscar’s plans are to graduate from high school, attend the University of Arizona, and someday play with Mariachi Cobre.

E. Venessa Medeiros is a fifteen-year-old Cholla High Magnet School student. She enjoys poetry and creative writing. Venessa worked on the first version of the Barrio Anita book. Being the senior editor has been a challenge, but she says the results are worth the hard work. Her job of overseeing all materials for copying and editing takes consistency. “You have to look out for gaps in the overlays,” she says. She hopes this project inspires other youth to go out and research the history of their communities.

Melissa Salazar is a sophomore at Desert View High School. Writing is her passion. She had many inspirational figures in her life. Her mother has acted as mother and father in one, so Melissa knows the importance of pride, endurance and determination. Melissa first learned of this project through her pastor. She was at first skeptical, but when she saw the determined looks on the faces of her co-workers, her skepticism soon became motivation and anticipation. She has gained social and writing skills. Her future involves writing or acting. This project was a great learning experience for her. Melissa was the senior graphics designer and learned the importance of the computer. Melissa is interested in the arts and in order for her persistence to be kept at a high and strong level, she needs to be reminded that there are barriers in life that she can overcome with determination. Through the stories of the elders, she was able to witness the courage it took for the people of the barrio to be recognized. Melissa has now added other inspirational figures to her life, the elders of Barrio Anita.

Roland Young is a fifteen-year-old student at Sunnyside High School. Roland was eager to become involved in a unique and fascinating project. His job as photo and map editor of the Barrio Anita Oral History Project team was to assist in taking photos, take responsibility for people's priceless photos, and to oversee graphs and maps of Barrio Anita. Roland also was the assistant editor. As part of his job, he assisted the editors in moving the writing process along more quickly. Roland also believes this project will help him in other experiences in life. Roland hopes to earn a degree in architecture at the University of Arizona. 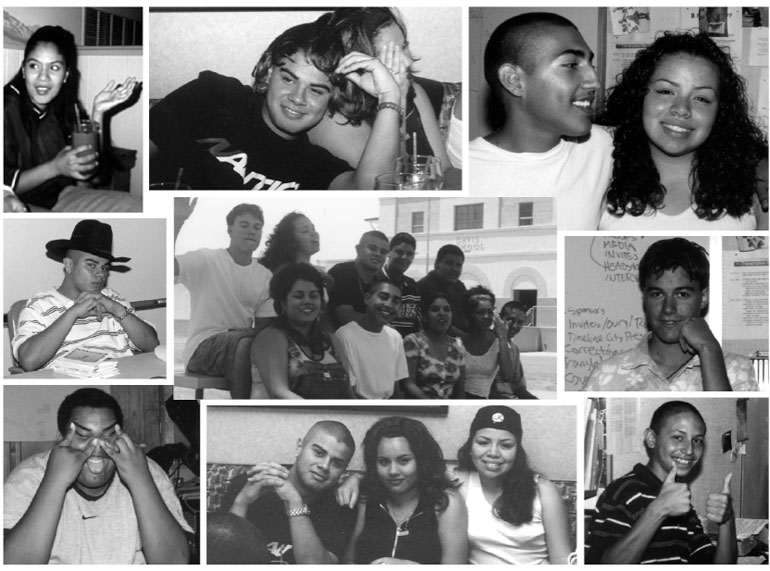