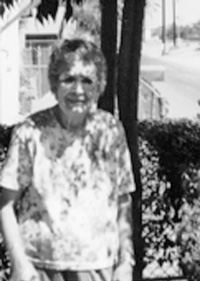 Have you lived in Barrio Anita your whole life?
Yes, I used to live on Anita street before, 910 N. Anita. Now I've been here for 56 years, at 923 N. Van Alstine. Van Alstine used to be Carmen Street.

Who were your parents?
Ramon Durazo and Mercedes Mendoza. They are not from the barrio, but moved here from Bisbee when I was six years old. Then my mom later remarried Miguel Leon.

Who were your siblings?
I'm the oldest. Then Ramon Durazo, but he passed away. Then there's Sovedia,Valdemar, Ferdinando, and Audomaro Leon. Our youngest sister, Grace, died in 1970.

Could you tell us about your kids?
I have five children. Anna Mercedes Valencia, Arthur Martinez, Cecilia Estrada, David Valenzuela, and Virginia Valenzuela. They all grew up in the barrio. David is forty-six years old now, and is a pharmacist in Fresno. Sheila lives in San Diego, and is a school principal. Arthur, "Tudy," is a retired postman now. Mercy worked many years at McClelland's Department Store, like I did. We spent most of our "careers" raising our families. My Virginia, I thank God for her. They're good kids, I thank God for my family.

What religion did you practice as a child?
I'm a Catholic and attend mass at Holy Family Church. My son, David, was an altar boy there. He's still a very religious boy.

Were you allowed to speak Spanish at Davis?
At that time, I don't think they paid too much attention; they were prejudiced, though. Brown people like me weren't treated very good sometimes. I remember there were lots of families that had children. They were so mean to us because we were not "g¨ueros." We all went to Davis school, all of us, and were the last of the Valenzuela's in my family to attend Davis.

Did you attend high school?
No, because I was supposed to learn how to keep house, wash, iron, make tortillas, and take care of children. That's the way it was back then. You had to work hard to keep a home. When I went to Roosevelt, I helped the teachers after school, and helped them at home. They would pay me 50 cents, back then that was a lot. The highest grade I completed was eighth grade at Safford. At fifteen I went looking for a job and got one at Woolworth’s on Congress.

What kind of traditions did your family have?
We have the same traditions that we still have now, like for the holidays, día de los santos, and the Virgen day. The big celebration was to go and visit with the Virgen all over the barrio. Everyone displayed their small altars of the Virgen and walked around the barrio. We'd have music and the priest from Holy Family Church would bless everyone. Día de San Juan was a big day. Everybody celebrated it. We had dances on the ground de tierra, they pressed it to make it hard for them to dance on. Every time you went dancing, the hem on your dress would be very dirty and torn from all the dancing, but we had a good time. That was our life then.

Where was the hangout in Barrio Anita?
Hay veras, a ballroom over there in West Congress. They had dancing on Saturdays, Sundays, and special days where everyone went. In later years the Del Rio Ballroom was the place to go. I had my birthday parties at Del Rio Ballroom and my sons celebrated their weddings there also.

What kind of music would you listen to?
I love music, all kinds of music. We had one of those old fashioned record players. Those little old records at that time, they had a little record in a little tube. You stuck it in there and it played.

What kind of transportation did your family have?
We walked everywhere, walked to school, and to the store. Or we took the little bus. It had benches on the side. It was a wonderful thing. Gilbert Laos was the bus driver. It was five cents to ride the bus then. Imagine!

Was there anyone famous from the barrio?
Hay Dios, all the músicos de aguí, y Lalo Guererro. He used to serenade us. He lived in Barrio Libre. He was with the “Carlistas.” The music was very beautiful. You could have people serenade you or have them come to your home. It was fun, but of course your parents had to be there. Monsignor Carrillo was a pastor at Holy Family Church for many years. Now he's at Saint Augustine Cathedral. He and his family are from the barrio too. Adalberto "Ito" Gonzales is also from our barrio. He's now a heart surgeon in the Phoenix area. I was the President of Davis School P.T.A. for four years when my son David attended school.

Did your family have special celebrations?
Oh yes, my birthday. As old as I am I celebrate my birthday even if I go there and sit down with my brother Audomaro. He's the president at the Eagles Club on Stone Avenue. We celebrate every birthday with music, family, grandchildren, my nieces, nephews, and friends.

What were your feelings about Barrio Anita?
Well I always enjoyed my life and friends. Most of them are all gone now. But I enjoyed my barrio when I was younger. They would tell me, "Why don't you move out of here? What's going to happen to your children with the environment around the barrio?" I didn't move away because if it was going to happen it would happen anywhere. I love my barrio, where my family was born and raised.

What are your favorite memories here in Barrio Anita?
I remember there was a family, Jesus Acedo, on the corner of North Anita. The house is still there but Monica Ballesteros lives in the house now. She had a daughter, Maria, and they had the best dances ever and they would invite everybody. Never did a boy come with you to a dance or sit with you. It was fun. Those were my memories, very precious ones. I remembered my younger years, we used to always have the relatives here on the weekends. My sister's husband, Manuel Molina was a panadero and he would bring all kinds of donuts and sweet breads. Pretty soon we had a yard filled with people. We had a little patch of grass in the back; we would think of it like a park. Virginia had a big pool, and all these kids and families would swim and have a good time. I found a picture of all these people in the yard eating lots of food. I was thinking, “ Where did all this food come from?” I think everybody brought their own side dish, like a potluck. It was nice, there were lots of tortillas. I've broken both my hips so I can't go dancing anymore, but my husband and I loved to dance. We'd have a ball.

How do you feel about the bilingual education program at Davis today?
I think it's wonderful now. I have a little great- great grandson that goes to Davis. His name is Matthew Hall. He's a good kid. Now he can count and knows all the months in Spanish. He is a very, very bright child.

What changes do you see in the barrio today?
Well, back then in the summer time there weren’t fences everywhere like there are now. It was very hot, and I would water the ground outside, and we would have cotton cots. We had several of those and we all slept outside. We never locked the doors because we didn't have to worry about anyone harming us, so why lock our doors?

"I would like to say I've lived here for many many years. I've never been sorry that I didn't go to better places. I'm very happy here! Also, if you want to make something of yourself you need to try very, very hard. Learn all you can to make your life worthwhile. Do it like you really mean it!"