We were all so united. 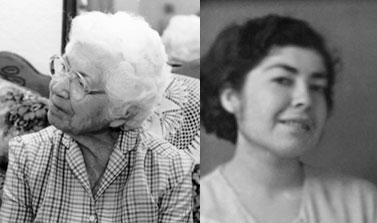 Where were you born?
At 711 North 11th Avenue on February 26, 1918. That was my sister's house, Margarita Olivas. Eventually, we moved to Carmen Avenue. We lived on Van Alstine since I was a child. So I didn't move out of the barrio until I was in my30s or 40s. I was raised in Barrio Anita.

Who were your parents and siblings?
My father was Jesus Celaya Rico, my mother was Porfiria Renteria. My sisters were Margarita Olivas, Rosa Gonzales, Porfiria Gastelum, Maria Carrillo, Adela Olivas, Carmen Alday, Josefa Carrillo, and Guadalupe Carrillo. My brother was Alfredo Rico.

Who did you marry?
I married Robert Mendez when I was sixteen. We met at a party. I used to go out with my cousin, and his girlfriend. They were going to have a party at this place. He came and asked us to go to this party, so we went with them. At that party I met him. We were together on and off, you know how you have your little breakups. We'd come and get together, and for some reason we'd split. We'd come back together, and see where we ended up?

Do you have children?
I have three sons; I had five. One died as a baby, he was only about two weeks old. He was Arthur. My oldest son passed away after he was already married and had children. He was Phillip. So I only have three left. They're Robert, Steven, and Frank. I think my children were the memories that I really treasured the most. More than many other memories.

What schools did you attend?
Davis and Roskruge. I didn't go to high school because I needed to work. I liked school and I did pretty good. I used to
think the teachers were so sweet. Then it came to the point where they wouldn't want us to speak any Spanish, just English. Of course, it was for our own good, but at that time we didn't think so.

What is one of the memories you have as a teenager?
Well, as I remember, it was fun to be a teenager. We could go around free and have fun. Our one thing to do was to just walk downtown and window shop almost every day. There was Steinfeld and J.C. Penney. Steinfeld was our favorite store because around Christmas time they used to have beautiful displays in the windows. We used to go and see them. That was where we would meet young men and other teenagers. In the barrio, there were very few that had a car. We always used to do everything by walking.

What would teenagers wear back then?
The penny oxfords. At the time, of course, as a teenager, you wanted to wear what everybody else was wearing.

Who were your good friends?
My good friends were the neighbors. We had the Martinez family that lived right on the corner. They had girls my age. They were a big family, and since we were a big family, there were a lot of sisters. There were 12 females in our family, and one male. Their friends used to come over to talk and play. The neighborhood was a very close neighborhood. All the neighbors liked each other and helped each other in every way they could. When they made something extra nice they'd send a plate to the neighbors to share, whatever you had. There was particularly this lady, her name was Maria Marquez, she used to like to play with us when we were youngsters. She used to call us over in the street in front of her house, which was right next door to my house. She used to play games like, “Matarile rile rile”, “hide and seek,” and all those games that you don't hear about. I remember a lot of people like the Ruiz family, Mrs. Banks, the Nobles, and the O'Kellys who lived on Anita street.

What was best about the barrio while you were growing up?
What was best was that the people were all so united. If somebody was sick the neighbors would always come around to see what they could do for you. Anything that happened, they were right there. They were more united than people are now, so that was a plus for the neighborhood.

What were your moral views as a teenager?
We were brought up to accept what we should do. I think most of the people knew everybody else in the neighborhood, and so they did not try anything funny on us young girls. My mom was a widow, she was left with all us young girls that she had to take care of. We just let everybody know that we were to be respected, we would respect them, and respect people. To respect whatever they did, no matter who they were. So, we didn't have any problems with that. We just grew up knowing that that was the way we were supposed to be.

What was your religion?
We were Catholic, I'm still Catholic. We went to Holy Family Church. They had all these saints all around the walls. The statues, those have disappeared. Back then, I remember that the father that was there then used to have plays. My sisters acted in some of them to raise funds. When they wanted to get statues sent, he would order them from Spain. They had real nice celebrations at that time. They used to have a big parade of trucks and they would put all the kids in costumes of the saints.

Did you have special celebrations?
Well, you know the people in the barrio liked to celebrate when it was somebody's birthday, and your saint day. They always used to invite families, and there were so many females. They danced out in the yard at night. Most of the girls went with their families, their mothers, or with an older lady. They never went alone.

Do you have any memories of Oury Park?
I used to go watch the ballgames. My kids used to go swimming at the Oury Park Pool. There was a time when they didn't allow the blacks to mix with the browns. They would separate the days for the browns. There were certain days that the black people wanted to be by themselves, and they would go swimming then. The school, which was Dunbar School at the time, it was just for black people. No whites could go there. It was later John Spring School when they mixed up the people, when everybody could go there. There was never a problem with the black families that lived here. We played with them just as well as everybody else. They didn't make any difference to us.

Do you remember anyone that played for the Oury Park Tigers?
Bustamante was one of them that used to play there all the time and I also remember a Frank Castro. They used to live in the barrio. We used to see the guys play ball.

Do you have any memories of the irrigation canal?
It used to go right across Anita, it was behind the houses on Van Alstine Street. All the neighbors right next to it used to go out there and take good care of it. They would wash all the walls of the canal and everything so it would be nice. They would use it for a swimming pool. All the kids would go swimming there.

Tell us the story about the "pony."
It was at the time when people didn't have cameras because they were so expensive. This man used to come around with a pony and charge fifty cents for a picture on his pony. Of course everybody wanted to take pictures on the pony. So there are a lot of pictures with somebody on the pony.

Do you remember any of the markets that used to be here?
Well, there used to be one right across from the church, which was Wing Lee at the time. Then there was a little market there on Anita street, right on the corner of Anita and Oury.

Who did you admire from the neighborhood?
Well, there were quite a few ladies that I used to look up to for one reason or another. Some because they were very helpful, they liked to do things for you. They would all come around and be helpful in anyway they could. They always looked after all of us.

What would you like to see happen in the neighborhood?
I think it's happening everyday. I see some of the young people are trying to do things for the best. We really appreciate the fact that they are trying to better themselves, and educate themselves.

Do you ever go back to the barrio?
I'm there all the time. There's quite a bit of change. The people are very different. I know very few people that are there now. Mostly the people. Lots of people moved away when they started buying homes away from there. Very different from the people I remember.