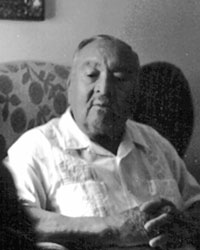 What was your address in Barrio Anita?
Well, I lived in two houses. One is 400 Oury Street next to Bertha Rico, that's the house my father used to own. Then me cambie en la pura esquina de la calle Anita y Oury, 682 N. Anita. That house belonged to Mr. Robles.

How did you and your husband meet?
I met him through Robert Mendez. Robert used to work at a companía se llamaba Schlitz y luego he met Juan, my husband, somewhere. Robert would tell him, vamos con Alicia. Then from there we started going to "A" Mountain and we went everywhere with him, los tres y yo. That's the way I met him, through Robert Mendez. He just passed away. His wife, Alicia Rico Mendez, is still alive.

How many kids did you have?
I have seis. My daughter Margarita is a judge, John is an engineer in El Paso, Martin works in an office for President Clinton, Madge is a nurse, Mary Lou is retired from teaching in Yuma, and Armando is a teacher.

Did your kids attend Davis?
Toditos fueron a la Davis, y a la Roskruge, después fueron a John Spring Junior High, and then they went to Tucson High.

Did you attend high school?
I went to high school, but that's it. I didn't like school.

Do you have any special memories that you treasure?
sí, todos me cuidaban. The only thing I really remember is that allá en esos tiempos todos estabamos muy unidos.

Who was famous when you were a teenager?
Ya ni me recuerdo. Pedro Infante, Lalo Guerrero y luego "Los Carlistas."

What do you feel is the biggest change in the barrio?
Everybody started dying. That's the biggest cambio, all the old people died. What's really left?
There is Bertha Ricoand la Monica.

What religion did you practice?
Católica. I would drag the kids to Mass every Sunday. They didn't have shoes, but they were there.

Did you ever have any encounter with ghosts?
Lo unico lo que sueño, and that's for sure. When I dream of my mother, she comes in the kitchen in white, through the back door and I say, "Mother, what are you doing here?" and she says, "Ay vine por café." The minute I serve it, she disappears. "Dice, "Cuidate alguien se va morir". Y me avisa cuando somebody's going to die and they do. Soy como las brujas.

Where was the main hangout when you were a teen?
Ibamos a la Riverside a bailar. It was a big salón de baile. You know donde está ahora Los Santos, right there era Riverside.

Do you remember the Oury Park Tigers?
Yes, eran Fito Bustamente, y puros jovenes, los Tigers. Eran muy buenos para jugar. They used to play every Sunday. I used to go all the time. It was about a block away de la casa.

Did any of your neighbors take care of you as a child?
Well, como le dije we were neighbors algo me pasaba a mi they used to give me a hand. O algo les pasaba a ellos yo les ayudaba. I still do that.