The Tigers were a stepping stone. 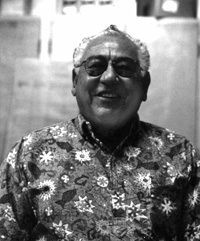 How long did you live in Barrio Anita?
I lived in Barrio Anita for thirty-two years, from the time of my birth to when the freeway was built. I moved in 1949, it was my last year at Tucson High. I didn't want to move, though.

Who were your parents?
Eduardo Castro and Alicia Acedo Castro.

Who were your siblings?
My step brother and sister Ramona and Albert Castro, and Alice Rice.

Did you marry?
I was discharged from the USMC in 1953, and married Mina Castro. She passed away in 1964. After that tragedy, I married my second wife, Carol Durazo. 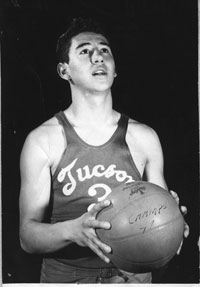 What religion did you practice?
I am Roman Catholic. When I was twelve or thirteen years old Father Carrillo and I were altar boys at Holy Family Church. It was a lot of fun. When I made my First Holy Communion, that was a big event for me. I went to confession the Saturday before my First Holy Communion. My mother didn't allow me to go to my baseball game that night because she said I would probably be bad.

What were your moral views as a teenager?
Everyone was my friend and I was to respect everybody. I was also to respect, listen, and obey my parents.

What kind of transportation did you and your family have?
"La pata."

Did you ever encounter ghosts in the barrio?
During this time there was no cooling, so we used to sleep outside. I was asleep with my mom, dad, and my sister in the back yard. I can vouch for this, I heard La Llorona go by there, and I got scared. She had this white cloth, and I could see her hair in the dark. I saw La Llorona going by the railroad tracks, and she was crying. I later asked my mom, "Who was that lady?" My mom said, "She was La Llorona. She's crying because she lost her babies, and she's looking for them." Here's another story: Manuel, Mary, and Alice Garcia were our neighbors. We must have been eight or ten years old, and I don't know why we weren't in bed. Well, we were out on the bleachers at Oury Park, and Manuel Garcia was kissing my sister, which was a "No-No!" If you want to believe it or not, I saw this thing come over around the bleachers where we were sitting. It was like a human figure or someone human flying there. I think it was something from outer space because I believe in U.F.O's. It happened just that one time. They never kissed again until they grew older, so I guess that's why.

What do you think was best about the barrio?
Everybody was family. I can't remember me, or anybody, fighting in the neighborhood. All of us shared what we possessed.

What years did you play with the Tigers?
I was fourteen years old when I started, and I stopped playing in 1950. 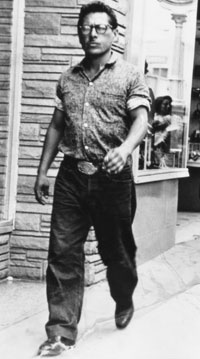 Were there any fights during the game?
Slim Williams was an Equipment Manager at the U of A. Slim was an umpire at the game that day and gave a bad call. Lolo, one of the spectators, confronted and yelled at Slim because he got upset. Slim told Lolo to go back, and Lolo went and took the ump mask off and started hitting him and would not stop. Besides that, no, not really.

Are there any memories of playing at Oury Park?
We beat Flour Mills: we won 4-3. It was tied at the eleventh inning, and we had a runner on second. I was up to bat...I hit a shot past the pitcher, Pancho Castro, and the guy on second scored. Also, going with the Oury Park Tigers to the southwest side of town, north of Santa Rita Park at Eagle Field on Thirteenth Street, we would play against the Red Caps, the Chargers, and the Ratas.

Quote: "I truthfully could say if I hadn't had that experience with the Oury Park Tigers, I wouldn't have gone to Tucson High or the U of A. It was a stepping stone."

Interesting Points:
- Oury Park came from Lauterio Acedo, my great, great, great grandfather. He donated that land to the city, to open the park.
- To call the emergency number, instead of 9-1-1, the number for the police was 1-2-6.
- Junior Noble, an African American man from the barrio, went to the Army and is now a famous actor in Japan.