Passing Through Many Hands

In 1796, Adjutant Inspector Roque de Medina, on behalf of Spain, granted "tame" Apaches land which included much of what is now known as Barrio Anita.

In 1828, Teodoro Ramírez bought the land from the Apaches for two muskets, sixteen pesos worth of tobacco, four zarapes, a horse and ten pesos (the Apaches wanted to use the money to buy gun powder). All this amounted to about one hundred pesos in value. This trade was approved by Apache chiefs Atune and Benito. 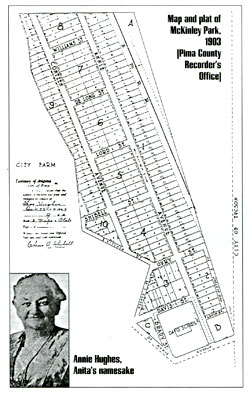 Thomas Hughes, Sr. bought the land from the Territory of Arizona on January 31, 1902.

Annie Hughes was the sister of Thomas Hughes, Sr. After Thomas Hughes's wife died, Annie Hughes moved in to help her brother raise his children. According to Richard Hughes, his great-grandfather named one of McKinley Park's main streets, "Annie Avenue", after his sister. It was soon after changed to ''Anita Avenue" ("Anita" is the Spanish translation for ''Annie''). From this street name, the area later came to be known as "Barrio Anita."