I Knew Where All the People Were

More Than 90 years on Brady Street 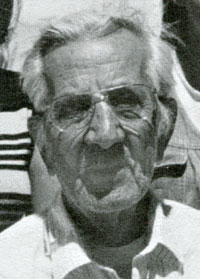 by Monique A. Lopez, Jannell Davis, and Alicia Pérez

Barrio Anita Roots:
Alfred Tellez can't remember who came to Barrio Anita first in his extended family, but he does know that his parents came to the barrio after they were married. All his siblings, except "one or two," were born in the house on Brady Street. Tellez claims that his family is the only one in the barrio that has been occupying the same family home for over ninety years. Mr. Tellez still lives in the house on Brady Street with his sister, Amelia Tellez Benton.

Do you remember any games you used to play as a child? Of course. There was las calabasítas. You would go around in a big round circle and all of you would be going round and round... and [you would be singing] and then you would say something about flopping down and the last one that sits down was disqualified.

And when you say that, you flop down and [if] you are still standing up, you get "burned."

What kind of child were you? I was never in trouble. I was too busy taking care of raising rabbits, chickens, ducks, pigeons... It was all up to me to take care of them…I used to walk those ducks to the [irrigation canal that ran through Barrio Anita] and they jumped in and then when I thought they'd go away... I called them back, "Pato-Pato-Pato!" They come up to the edge, then they come home again.

Do you remember any famous family recipes? My mother was good at making tesguin…she celebrated her Saint's Day with tesguin…you put everything in it except the kitchen sink...she would put in corn and the ends of corn...cascara de naranjas...squares of yeast...you would let it brew for a few days and then you would strain it.

Is it alcoholic? No, but sometimes you would get a little happy. (Laughs.)

Did you attend Davis Elementary? Yeah.

Can you describe a typical day there? In the morning [before] you went into the building you'd line up by classes right in front of the flag pole... there used to be two entrances, [one for the lower grades and one for the upper grades]. The second floor [entrance] was [for] older kids, like fourth, fifth, sixth grade...There was a teacher here at Davis she [taught] 1-C... she would come go over [to our house on Brady] every day for lunch... Miss Douglas. Every time, my mother put a cloth on the table for the teacher to eat. She paid my mother. I don't know how they communicated [with each other]. One spoke English and the other Spanish... One time we got a postcard from somewhere, it was in Spanish y comenso: "Querida Madre"... And we couldn't figure out who the heck it was from. But then [we figured out], it was the teacher! Aprendio Spanish bien. And she started with that ... Querida Madre... Dear Mother.

Did you go to high school? No, I couldn't get in. We had the Depression and there was no income... this teacher, she asked a friend of mine if I had gone to high school and [the friend told her I hadn't] and the teacher got mad and told my friend I should have gone... [but] I couldn't afford it.

How did your parents support your family financially? My father worked for the City... and as a watchman for the University.

Was there any other financial support? During the Depression... we didn't get... money, we got the food, we just [had to] go and pick it up... on the corner downtown, on Church and Alameda... in the thirties, they had the CCC [Civilian Conservation Corps]. It was for young men, sixteen and up…they were sent to camps. In fact, I used to be one... the CCC used to pay a dollar a day, then I worked for NYA [National Youth Association]... I used to work [for them] six days a month, like three days here and three days there... we got about fifteen dollars... we did a lot of clean ups... like the University of Arizona grounds we used to take care of and fix the lawns and up where the [Arizona State Museum] is, we landscaped all that and...I helped where the Pima County Hospital was, on South Sixth Avenue, we used to make adobe bricks for... building the hospital. It was a dirty job because we had to use oil instead of water because it [made the bricks] more solid, they lasted longer.

What religion were you raised in? I am Catholic... [When I was growing up] everybody [in Barrio Anita] went to Holy Family. Baptism, first communion, they had beautiful processions and everything... The priest at that time, he would make you cry by his sermons.

What was his name? Father Carmelo.

Did the church have any special celebrations? [I remember] Las Posadas. They were really beautiful because they used to just light the inside [of the church]... with Japanese lanterns.... and in May, little girls [would offer flowers to the Virgin]... I liked Holy Thursday [during] Lent, the services were beautiful... there would be fifteen to twenty girls dressed in black and fifteen to twenty girls dressed in white and they would have a basket of petals ...and during the evening [Mass] you have breaks and the girls would go and shower the altars with petals and perfume and it smelled so nice....One Sunday...we had a procession... We paraded from Holy Family [Church] to Santa Cruz [Church]... they... took the [statues of the] Saints out of the church and put them on floats... The one I remember real well is Santa Teresita, they made a big float and they colored it with blue and white... and the Virgin was [on a float] at the front [of the procession]... I was carrying a flag... it was lucky to carry a flag... we [marched] all the way down Congress Street and Stone Avenue.

Do you remember any neighborhood "characters"?
In the 1920s, a junkman would come from the South Side every Saturday, he had a small wagon and a horse. He would collect bottles, rags, copper wire, automobile tires, any kind of junk. We'd go around [as boys] and collect things to sell to him... when the Tucson Electric Power guys would clip ends of wire, we'd collect those... If I made thirty cents [from the junkman], I'd be a rich man. [I also remember] every Sunday morning, early in the morning, a lady selling menudo from her wagon. People would come outside with their big pots and I looked forward to that menudo. 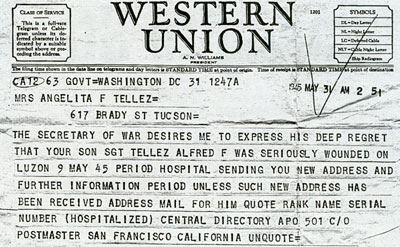 What turning points do you see in your life, looking back? [I was in the Army during World War II]
I got wounded two times... I got wounded in November of 1944 and May of 1945 [in the Philippines]... I still have the telegrams that they sent my mother, but what gets me was [they] said I was greatly injured which I wasn't.

What is one of your happiest memories? I got a free trip to Washington D.C. through the Boy Scouts in 1937... I had to raise money to buy a uniform... you know Johnny Low?

We interviewed his brother, Loy. Yeah, well, he was part of the Boy Scout troop, too.... the [troop] wanted to send somebody to a Washington D.C. [Boy Scout conference] and they wanted to send me.... so that's how I got there.

Why did the boys pick you? I guess they looked up to me.

How did you raise money for the uniform? My mother... took in [clothes to wash].

Who were your best friends in the neighborhood back then? The Lancasters... there was Joe, Alfonso, Richard, Carlos. Every Fourth of July, we'd go out into the desert to pick saguaro fruit.

What kinds of things would you guys do together? Play baseball.

At Oury? No, not all the time. [Sometimes] in the [Davis] school yard. See, the school didn't have a fence [then]... we used to pay hide and seek... and come hide in the school yard... At the corner grocery store [Wing Lee's], we used to get together in the evenings and just sit around and talk.

Who were your family's best friends in Barrio Anita? Everybody... if somebody was sick, you sent them a pot of beans or a pot of chicken soup or something.

If you were writing a history of this area, what specific events would be the most interesting or important to include? Sunday afternoons at Oury Park [lots of people used to come to watch] local baseball teams play. [Our team was called] the Oury Park Tigers.... Every Sunday there used to be two, three, four hundred people there for the game, it was really something to look forward to. That was in the twenties, the late twenties.... One time we had a barbecue, we dug a hole in the ground and put the meat and sauce in and then rocks.

What would you say are the biggest changes you have seen in Barrio Anita? The people. Nobody lends you a hand for nothing [now]. I used to know everybody from the corner down... now we don't know who lives there, you could ask me where was this number and this number, and I could ask you, "Who are you looking for?" and [if you gave me their name] I would say, "Oh, the house there." I could direct them by name... because I knew where all the people were.