From Canton to Barrio Anita 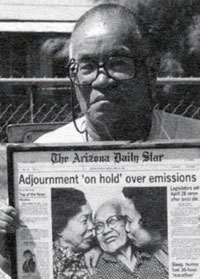 by Oscar Madrid and Jannell Davis

Barrio Anita Roots:
In the early 1920s, Sew Ping Low opened a grocery store at 928 Anita Street in Barrio Anita. In 1923, he went back to China and returned with his wife, Lee Shee Low and infant son, Lay Low. Sew Ping Low died in 1937. Lee Shee-known as "Mary" in Anita and "Papa" (Chinese for "grandmother") amongst friends and relatives ran the store until her retirement in 1974. She is pictured in the center of the 1980 newspaper photo held by Mr. Low, above.

Tell us about your family's store in Barrio Anita. Our store name [in Barrio Anita] was Sew Kee. It was my father's name. My mother's name was... Lee Shee Low, but everybody called her Mary... it seemed like they called all the Chinese woman around town "Mary"... the Mexican people around Barrio Anita always called [her] Mary or Maria. Maybe because of their religion, I guess... My mother passed away twenty years ago. I was fifteen or sixteen when my father passed away [1937]. I had to go work [to help the family]. I went to work for my uncle... he had a store called Black and White on Speedway and Park. His name was Low So Soon. Then I worked at Eagle Market on 6th and 26th Street... I had to go to the service... '44 or 45... I was stationed at the Army Air Force at Williams Field Arizona... [When I came back] I had a grocery store on 4th Avenue and 16th Street called OK Market. Well, actually my uncle, my father's brother, bought it for me... I had to pay my uncle back. I owned it for twenty-four to twenty-five years. I retired in 1972.

Did you used to play at Oury Park? I used to play baseball at Oury Park before they built the train and pool and everything. [The team was called the] Wildcats. It was a softball team. I played second base. I was thirteen or fourteen. We played other teams... teams from around the [area] like from Hollywood.

What was one of the hardest times in the barrio? At one time [my family] was actually very poor in comparison to other people then. During the Depression... people were buying one or two slices of bologna, one potato, an egg--just to get by. That's how my mother ran the store. I don't think she took in more than five dollars a day. Of course, you can't make money on a slice of bologna... somebody asked my mother to go on welfare and she didn't do it. She raised all five, six kids.

Did you go on to high school? When I went to Roskruge, I think I was the... first seventh grader that got a letter for sports. I played basketball and I ran track, too. I went just to the ninth grade at Roskruge... We were poor, my father couldn't afford to buy books... I think I'm the only one in the family that didn't go to high school.

What kind of food did you eat growing up? We ate mostly Chinese food. We usually had porridge in the morning and rice. [At lunch] we would... have rice and chicken and a piece of pork or something and at dinner about the same. My mother used to make good tamales... she was a very good cook actually. She cooked Mexican food, sometimes we ate tacos. Eulalia Torres [a resident of Barrio Anita and great-grandmother of one of the authors of this book, Oscar Madrid] and my mother were very good friends. My mother used to feed [Oscar's] great-grandfather [Cornelio Torres] all the time.