The Roots of a Religious Life 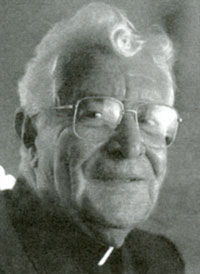 by Vanessa Medeiros and Anjounette Martinez

Barrio Anita Roots:
"My grandmother on my mother's side had a house on Anita that my Dad bought for five hundred dollars. My Dad was able to fix it gradually."

Did you know your grandparents? We never had the good fortune of knowing our grandfathers the ones we did know were our grandmothers. My mother's mother lived out on [a] ranch, in the Jayne's Station area... And that was great visiting her because they had a ranch with horses, cattle, and pigs. They grew everything from peanuts to sugar cane... My Dad's mother lived here downtown on Convent Avenue... She was mostly bedridden because she had been hit by a car.

Who raised you at home? Mom and Dad. Dad was a sickly person. He had leukemia and at that time medicine didn't know as much as they do now about leukemia. So he was constantly in hospitals....In order to support us he started selling vegetables up and down the streets and a lot of these vegetables we got from... my grandmother's farm. Watermelons, sugar canes and all of those things. After school, my brothers, sister and I used to walk up and down the streets here [in Barrio Anita] helping him.

What did you playas a child? Primarily baseball and softball.

Did you play for Davis School? No. Well, we played games here all the time, but we used to play in the empty lots around the community.... There was the Oury Park Pachucos that was a softball team. The Economy Printers that was a baseball team.

Do you have fond memories of Oury Park? Yeah. Playing ball, my Dad taking me to ball games. Also when there were other teams playing, especially local teams played teams from Mexico.

What was your address on Anita Street? 714. That's where there was an irrigation ditch going by... it's no longer there.

Did you attend Davis? I attended Davis School including that infamous !-C...then one year at Roskruge. And then in September of 1944, I went to the Seminary in Columbus, Ohio.

What was the name of the seminary you attended? The Pontifical College Josephinum. It was founded by a German priest who came to the States.

How did the seminary come about in your life? I remember very well a nun... asking me what I was going to be and I said I wanted to be a priest. I was ten years old and she said 'you're too young'. I said that may be, but that's what I want to be and I never lost that desire.

So your family was very religious? Yes... Mom and Dad used to go to Mass every single day when Dad was able to. Then all of my brothers and I were altar servers so we would end up serving daily Mass, too. And on Sundays, you had Masses as usual but we would all go back in the evening for rosary and benediction. The second Sunday of the month was in honor of Our Lady of Mount Carmel because the church was associated with the Carmelite Order. The... fourth Sunday of the month was the Infant of Prague procession, it was for the children. We also had outside processions... Corpus Christi was the procession honoring the Blessed Sacrament that would stop at three different homes and there you would have benediction with the Blessed Sacrament. It was ... a very excellent way of building the community. Not just among the Catholics ... among everyone. The interesting thing in Anita was there were all sorts of different cultures. You had the Whites, the Browns, the Blacks, the Orientals and the Native Americans.

So it was diverse? The clue is ... it was a very united diversity.

Everyone got along? We knew each other, we all trusted each other. We used to sleep outside at night during the summer months.

And then on Día de San Juan, for some reason, people think you are supposed to at least go swimming or get wet ... People would get together and spend a lot of time along the irrigation ditches where there was shade. They would eat there, just celebrate there. That was a community-building thing also.