Rallies to revive the park... Making Oury what it is today 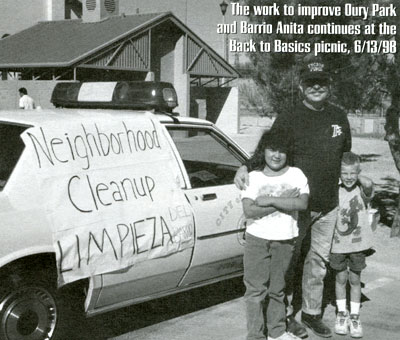 The Oury Park grounds and pool were built by the W.P.A (Works Progress Administration) and dedicated on November 18, 1936. In the thirties, the Barrio Anita community struggled to obtain equipment for Oury Park. The Oury Park House Committee put out an appeal for playground equipment. The Y.W.C.A asked for toys, clothing, and play equipment. The Junior League asked for books. The Oury Park Nursery School asked for bathing suits for the children.

Many organizations in Barrio Anita helped out in the struggle to make Oury Park a place where people wanted to be. For example, the local Barrio Anita Boy Scout troop offered to mend any baseball bats and rackets that needed repair, and said they would repair any other equipment if needed.

In the seventies, the struggle for improvements began again. Local activists and residents--including Salomón Baldenegro,Octavio Marquez, Arnoldo Palacios, Richard Colores, Edward and Robert Prig, Frank Wood and Steven Soto--put together a list of needs for Oury Park. The list included requests for better playground equipment, outside bathrooms, paved basketball courts, and a better location of the athletic fields. Mayor James Corbett said the residents of Barrio Anita had presented a reasonable list of demands. Upon receiving the list in August, 1971, Corbett ordered improvements made within thirty days.