Loss and Healing in the Barrio 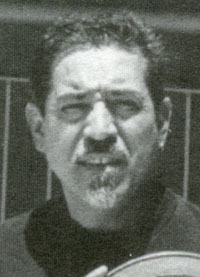 by Monique A. Lopez and Anjounette Martinez

Who raised you? In my family we were raised by a lot of different people. My grandma was a big source for raising me. My tias were very important in raising us... My tias from Mexico would come and take care of us also... Most of the time it was mainly my Grandma, my Mom and my tia.

What games did you play as a child? Kick ball, volleyball, tether ball, always something with a ball. We would roller skate--it's hard to roller skate on dirt, let me tell you that. We would go swimming in the summer time, we liked to climb trees... we built tree houses.

Did you used to play at Oury Park? Baseball, kick ball, swim there in the summertime. They had organized games inside, they had ping-pong, they had Chinese checkers. They had a great slide... [and] those little merry-go-rounds that you would get on and turn... Oury Park was really important to our family because it gave us a place to go... and play where there was grass, not just dirt.

Were there neighborhood gangs in Barrio Anita? There probably were, I wasn't aware of them. The gangs were different, they were called pachucos then. They all wore khaki pants... and they had the white t-shirts that were rolled up with their cigarettes in the sleeves. They weren't really like gangs, like you see gangs today. Nobody was out to hurt anybody. They were there, but it wasn't like they would threaten you.

Then what purpose did they serve? Be in a gang... they stuck together in a little group.

Did elders think they were trouble? Well, the elders didn't like them... My uncle was a pachuco... my grandma didn't like it, but she didn't do anything about it.

Did you go to Davis Elementary? Yes.

Can you describe a typical day for you at Davis? I remember first coming to Davis when I was five years old, for kindergarten... My first language was Spanish, but when I was four years old, my Mom decided that I needed to learn English better. So, I could not... speak Spanish to my peers, but if [adults] talked to me in Spanish I could answer them back in Spanish... I knew my ABC's by the time I was in kindergarten, I knew how to count up to ten; I knew how to read .... So when I got to kindergarten... I was bored, because in kindergarten all they did was finger paint, play and cut stuff out. So after about four days the teacher approached my Mom and said your son is really bored, we tested him, we think he ought to be in first grade. Well, I was a five year old in first grade... I was the tiniest of all of them... I remember that Davis was the first time I had ever really seen stairs going up. We lived in houses that were all one-story.

About what grade did everyone stop school? Was it normal to go to college? No, I was the only one [in my family] that went to college. Everyone else usually... went to high school.

Was there any other kind of discrimination at school? Not really. Everyone got along together. I mean, there was quite a mix when I went to school because you had Caucasians, Hispanics... Blacks, Chinese.

How did your parents support the family financially? Both parents worked... My Dad was a roofer and my Mom worked for [a] dry cleaners.

What about welfare? My Mom just didn't believe in it. In our family... if we were missing something, uncles, aunts, grandmother would make sure that there would be enough so that the kids would be fed and clothed... the familia took care of the familia.

Did you raise any livestock on your Barrio Anita property? Grandpa had chickens, pigeons, guinea pigs, a goose that I hated, rabbits.

Why did you hate the goose? Because the goose would chase you and bite you.

Never bit your grandpa before? My grandpa would have killed it.

Were there any famous family recipes? Grandpa raised peaches, his peaches were incredible, I mean they were enormous. We were not allowed to touch the tree either. Every year grandma would cook the peaches and these peaches were phenomenal, we would wait until they cooled down to get some.

Would you say the people around Barrio Anita were very religious? Oh, yeah.

What church did you go to? Holy Family... All of us attended Holy Family practically.

Did the church sponsor any social events? They used to have bake-offs where everyone would bake a cake or something, then you'd have cake walks, and you could go home with cake. I know that when I was in C.Y.O. [Catholic Youth Organization]... every Sunday after mass we would sell donuts and coffee and hot chocolate... to raise money for the church.

Did people around hem see in believe in ghosts? My own personal experience is... after Mom passed away.... a couple of years later... I was walking down the street on Congress. I used to go to the Chicago Store a lot because I played the clarinet and I needed reeds... I remember one day just kind of like walking down the street, and this woman passed me. It was very eerie, like I knew this person. So, as she turned the corner, I thought, "That's Mom,” so I [turned around] and started walking [after] her and I turned the corner where she had turned and there was nobody there. I tell that story because maybe it was a ghost... I don't know, but it was very strange to me that this person passed and I felt something, and as they go around the corner, I turn to go around the corner right after them [and] I turn and there was nobody there. I walked to make sure there was no other entrances, but there was nothing... [she] was gone.

What do you remember as one of the happiest times in Barrio Anita? As a kid I remember the streets weren't paved then, but when it would rain we used to love to... go out in the streets when it was muddy, these frogs would come up. Being able to run around muddy, with no shoes on and get your feet in mud that was great.

Where there any people around Barrio Anita who you especially looked up to or admired? Yes, the Banks.

Why? Because she was a teacher and she had the first pink T-bird around, and they owned Jack's Barbecue. They were outstanding... She was a smart lady, but she was also a very giving woman.

What was her first name? Laura. Laura Banks. She used to live in that pink house... it's that women's shelter [now].

What were Barrio Anita neighborhood problems when you were growing up? We didn't have a whole lot of street lights that was for sure. If the street lights went out it would take a while for them to repair it. So, you would be in the dark, and [it was scary] to walk in the dark.

Do you have any memories of the Del Rio Ballroom? Sure, it had one of the slippiest floors of all the dance floors in Tucson. That floor you could get on, and as a little kid, you know... you could slide--whoosh!--real good on the floor. It was really waxed... [one of my memories at] the ballroom was watching my parents dance on that floor.

What kinds of clothes did people wear to go dancing? All the men wore a shirt and tie... good pants, dress shoes. The women dressed up in fancy dresses, high heels, hair done up. I remember one skirt that my Mom used to have, it used to be this big huge one, lots of petticoats, you don't see petticoats anymore. It was... a huge skirt and it was made out of felt, and it had this big jaguar... it had glitter for its eyes and its spots and stuff... I remember that skirt because when she would dance, it would flare out... Mom was styling.