Looking Back at a Tragedy 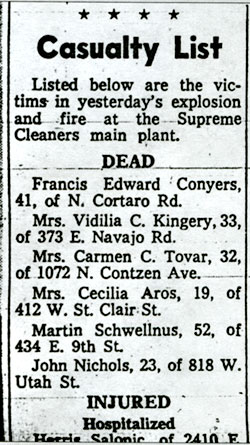 by Monique A. Lopez

"Hundreds of city workmen and volunteers used their hands to dig many of the victims out of the debris." (Arizona Daily Star. 3/30/63.)

One employee, Andiettte O'Conner, was close to the entrance inside the building when the explosion occurred: "I had looked at my watch about five minutes before the explosion. The next thing I heard was a boom and the roof started falling in." (Arizona Daily Star. 3/30/63.)

"The entire north wall was blown into Grant Road, crushing three parked cars. The area looked as if a bomb had been dropped." (Arizona Daily Star. 3/30/63.)

"The force of the blast was so great that a 200-pound piece of concrete was hurled through a corrugated metal roof of the nearby Musselman's Cycle Shop, on N. Stone Ave. (Arizona Daily Star. 3/30/63.)

"Priests quietly performed the last rites to those either dead or dying." (Arizona Daily Star. 3/30/63.)

On Friday, March 29, 1963, twelve year old Tony Tovar woke up and got ready for school as usual. When seeing his Mom, he noticed she wasn't feeling well.

"Mom, why don't you just stay home?" he asked. He has a strange feeling and didn't want her to go.

They both went their seperate ways. About 10:45 a.m., Tony was in math class at John Springs Jonior High. All of a sudden the whole place shook as if a small earthquake had occurred. The lights flickered off and on like something out of a horror movie. Not thinking much of the incident, Tony continued his daily routine of leave class early for lunch because he was a crossing gaurd. 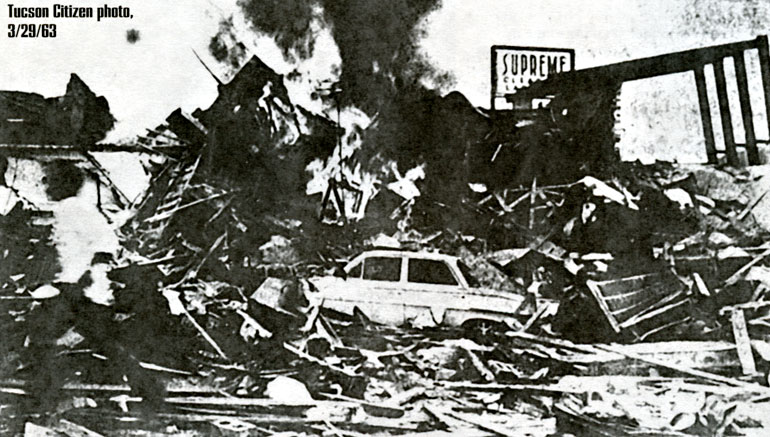 "Did you hear about the explosion?"

"The one at Supreme Cleaners"

Tony dropped his lunch tray, ran to his locker, threw his stuff in there, and ran home. It began to rain. He looked behind him. Balls of dark smoke ascended into the sky.

He rushed through the back door of his Nana's house. When he opened the door, his eyes and his Nana's eyes met. At that moment he knew something wrong had happened.

Tony's father had been in California working, so his tio had to go indentify the body. It was very difficult to tell who she was, but she had on her wedding band which was inscribed inside.

Now fourty years old, Tony Tovar continues to live with the loss of his mother.

"When you love somebody a lot, and you lose them, it hurts a lot."

Sometimes it's healthy to reminisce about lost loved ones so their memories never fade.