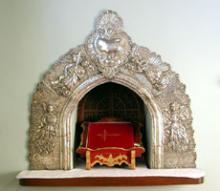 The Reverend John E. Kitagawa, Rector of St. Philip's In The Hills Episcopal Church, provided helpful insights as well as access to Church buildings. Gerald Klever contributed many hours of his time as well as shared his knowledge of the Church's history and architecture.

The images used in this website come from several sources.

Photographs and slides that were provided by St. Philip's In The Hills Episcopal Church were digitized by the staff of the Learning Technologies Center in May 2004. Images were saved to Photoshop's PSD format and copies edited for Web publishing were saved as JPEGs. Code: STP

Images of fine arts objects captured by Garry Forger were shot on a Nikon coolpix 4500 digital camera, May 2004, at the church. Images were saved as JPEGs. Code: GF

Other images were captured as screen shots from the QTVR panoramas created by Gary Mackender. Code: GM