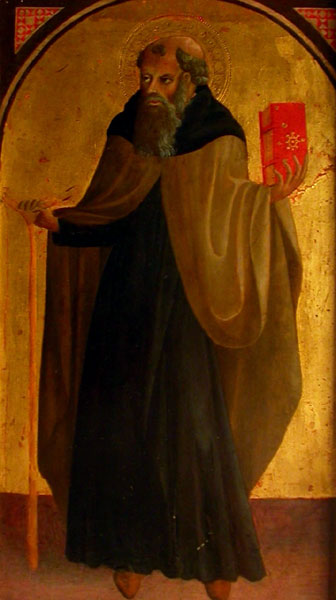 St. Anthony was the first Christian monk (c. 251-356 AD) and was born near Memphis, Egypt. His parents died when he was 20 and left him and his sister a large estate. In Church, he heard the words of Christ to the rich man, “Go and see what you have, and give it to the poor, and you shall have treasure in heaven.” He went home and gave his best land to his neighbors, sold the rest and his possessions and gave the profit to the poor, except for subsistence for his sister and himself. He placed his sister in the first nunnery. He went into solitude, eating only bread and salt, and drinking water. When he was 35, he went to the top of a mountain and lived there for 20 years. When he was 54, he founded his first monastery and became its abbot. He left the monastery only to organize monastic communities. Later in life, he took up the cause against a heretic, Arius (d. 336 AD), a Christian who taught that: (1) God is alone, unknowable, and separate from every human being; (2) Christ is a secondary deity not equal to God; and Christ assumed a human body but not a human soul. Anthony lived to 105 years, according to legend. [source: tour notes]