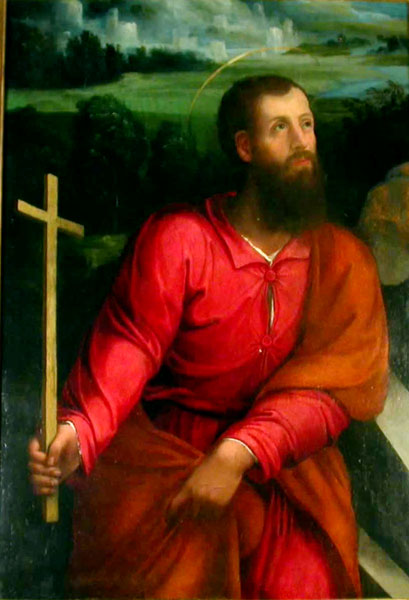 St. Philip, patron saint of St. Philip's In The Hills Episcopal Church and one of the 12 Apostles of Christ. It was probably created in a studio with Battista Dossi assisting. It was part of a large altar piece of an enthroned Madonna and Child toward whom Philip and James looked. The James painting is in Amherst, Massachusetts. The artist wanted to show that Philip was crucified on a cross, probably head down in Hierapolis (Turkey) about 80 AD, which Philip holds in his right hand. This painting is rare because few paintings of St. Philip still exist. Kress curators carefully restored it after finding its surface blistered and almost in shreds.

Giovanni de Lutero was called Dossi, probably from his presumed birthplace, the Mantuan village of Dosso, where his father owned property. Dossi was a painter in the court of one of the Dukes of Este, who were members of the prominent Este family of cardinals, archbishops, and rulers of Italy in the 1400s and 1500s (probably Ercole Este II, 1508-1559, married to the daughter of Louis XII of France), a prominent patron of the arts. He was part of the Ferrarese school of painters, but developed under the influence of Tintoretto (1518-1594), Giorgone (Giorgone da Castelfranco, also known as Giorgio Barbarelli) (1478-1511), and Titian (1477-1576), Italian painters. Dossi’s most significant contribution is his romantic landscapes, seen in the background of this painting. [source: tour notes]