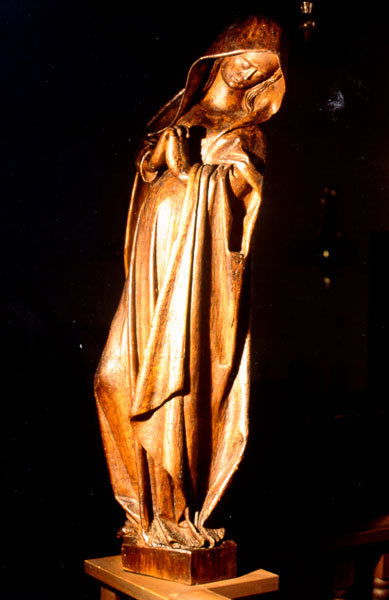 This is one of two hand-carved, basswood statues were originally part of a triptych (three statues) atop a wood rood screen. (In medieval cathedrals and churches, the wood screen separates the nave from the choir and chancel). They surrounded Jesus on the cross, with the grieving Mary, Jesus’ mother, on the left and John, Jesus’ disciple, on the right. The central figure of the crucified Christ has been lost. On the cross, Jesus said to his mother, “Woman, behold your son”, meaning John. And to John he said, “Behold your mother,” meaning that John was to care for Mary after Jesus' ascension.

The statues are by an unknown Rhenish carver who probably created them during religious wars in medieval Dijon, Burgundy, where much sculpture was created. These statues came from the convent of Gomer in Fontaine, Burgundy, France. The Laboratory of Isotope Geochemistry at the University of Arizona used a wood ring test to establish that the wood was cut between 1400 and 1480. These statues were probably rescued during the French Revolution when almost anything in art was destroyed.

The first Rector of St. Philip’s, George Ferguson (1936-1968), saw these statues at Waldenstein’s Gallery in New York City. He told Rush Kress, a member of St. Philip’s who had a winter home in Tucson. Rush was the younger brother of Samuel Kress, of Kresge "5- and 10-cent" department store fame, and Administrator of the S. H. Kress Foundation after Samuel died. The Kress Foundation gave a piece of art to many Kress stores, to the then-new National Gallery of Art in Washington, D.C., and to many universities and colleges, including the University of Arizona, which has a large Kress collection. The Kress Foundation bought the pair of statues for $5,000 and gave them to the Church in keeping with the Foundation’s philosophy of distributing works of European art throughout the United States. [source: tour notes]