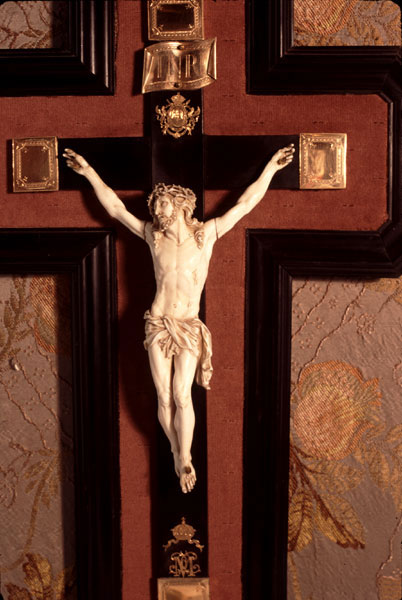 This delicately carved ivory crucifix is called “Carlota’s Crucifix” because Pope Pius IX presented it to Carlota (daughter of King Leopold I of Belgium; 1840-1927) Maximilian’s wife, when she went to Mexico with him when he became Emperor. She really wanted money for the trip to establish the empire, but got this crucifix instead. Notice that this carved ivory cross has two seals:

In the mid-1850s, the government of Mexico was in the midst of a national bankruptcy. It confiscated Roman Catholic Church properties. Pope Pius IX (Giovanni Maria Mastai-Ferretti, (1792-1878) wanted these properties returned to the Church. The French invaded Mexico. After the French had partially conquered Mexico, some Mexican notables in exile met with the French, adopted the imperial form of government for Mexico and offered the throne to Maximilian. He accepted on April 10, 1864, and reached Mexico City on June 12, 1864. Benito Juarez (1806-1872), a lawyer from Oaxaca, spearheaded revolutionary forces to drive the French out. Maximilian, with French troops, drove Benito Juarez north over the border into the U.S. The U.S. government refused to recognize the empire and demanded that the French withdraw their army. Napoleon II withdrew the French troops, breaking his pledge of support to Maximilian. Juarez’ soldiers returned and Maximilian was defeated and forced to surrender on May 15, 1867. He was court-martialed and shot by firing squad at Queretaro on June 19, 1867.

After Maximilian’s death, Carlota returned to Belgium. She became mentally deranged. Her family took care of her. It is said that once a year she went to the Embarcadero, the same place from where she and Maximilian sailed for Mexico, and waited for him to return home. [source: tour notes]