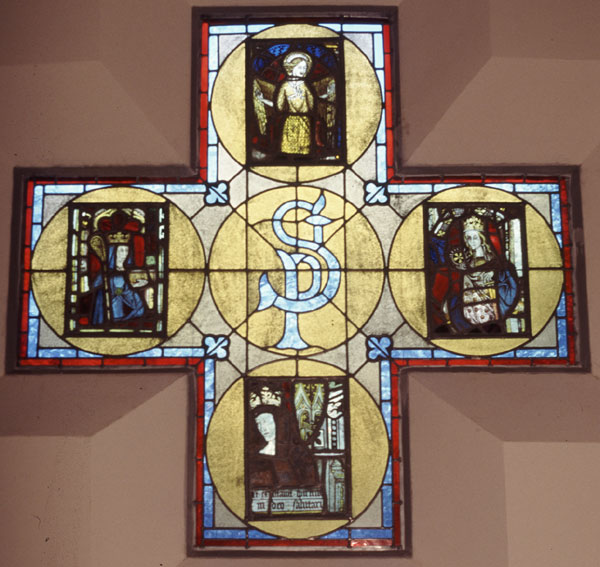 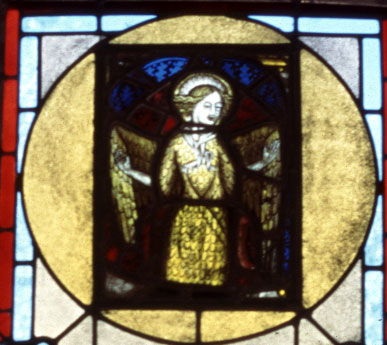 These glass pictures in a cross portray St. Michael at the top, and three female saints. 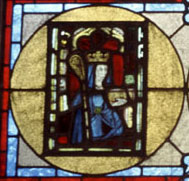 Left: St. Clare of Assisi (1194-1253), Founder of the Franciscan Poor Clares. At age 21, she became the Abess (head) of a convent dedicated to absolute poverty located next to St. Damiano Church in Assisi, Italy. They provided quarters for homeless Saracen and Muslim girls. Notice that she is holding a box containing the sacraments. When Saracens attacked the convent wall to take the girls away, she was ill but was carried to the wall, prayed, and placed the Sacrament where they could see it. They supposedly fled from the convent. She is a German saint known for her supernatural visions and life of prayer. 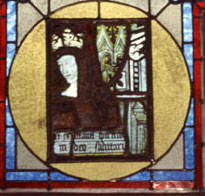 Bottom: St. Barbara is a third century virgin martyr. In the Middle Ages, she was a most popular saint. Notice the tower. She was the daughter of a very rich Greek man, Dioscorus, who kept her imprisoned in a high tower because of her great beauty. Princes sought her hand in marriage, but she refused, saying that she did not wish to marry anyone. She prayed and studied in the tower. While her father was away on a trip, she descended from the tower to a bathhouse that he was building. She persuaded the workmen to build a third window in it to honor the Trinity. She lived there and emulated John the Baptist by eating honeysuckle and locusts. She went back to the tower. Her father returned and was so angry that he tried to kill her with his sword, but failed. He had her thrown into prison. He denounced her before a civil tribunal. She would not recant so she was scourged and beaten. But she endured. Her father took her to a mountain and stabbed her to death. Her father was immediately killed by a lightening bolt and his body reduced to ashes. She is the patron saint of miners, firemen, artillery men and women, and prisoners. 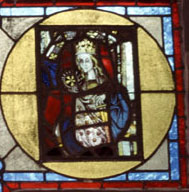 Right: St. Catherine of Alexandria  (?-310 A.D.) was a virgin martyr born to a noble family. She converted to Christianity, then denounced Emperor Maxentius (reign: 306- 312) for persecuting Christians. After her arrest, she debated 50 pagan philosophers and converted all of them. Maxentius burned them to death. He offered her a royal marriage if she would deny her faith. She refused and was sent to jail, where she converted Maxentius’ wife and 200 of his soldiers while he was out of the country. He had all of them put to death. Notice the wheel. She was strapped onto a spiked wheel. It broke and she was beheaded. According to legend, her body was carried to Mount Sinai to be buried. St. Catherine’s monastery is still there, occupied by monks. [source: tour notes]