Our Lady of Guatemala 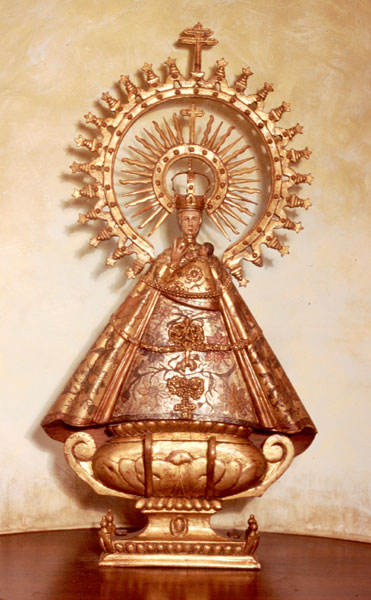 This carved wood statue has overlays of gesso and embossed gold. Here, the Virgin is the Queen of Heaven, with a double crown, holding the Christ child and the globe, symbolizing his sovereignty over the world. The double crown is from an allusion in the Book of Revelations. The symbol of the Order of the Golden Fleece on the Virgin’s dress was begun by the Duke of Burgundy (ca. 1000 A.D.), who wished to honor the weaving skills of the people in Flanders, in the lowlands of Belgium. The Golden Fleece is from Greek mythology where Jason had poor people submerge their sheepskins into the water of a stream. They lifted the fleece and found that they had flecks of gold. [source: tour notes]