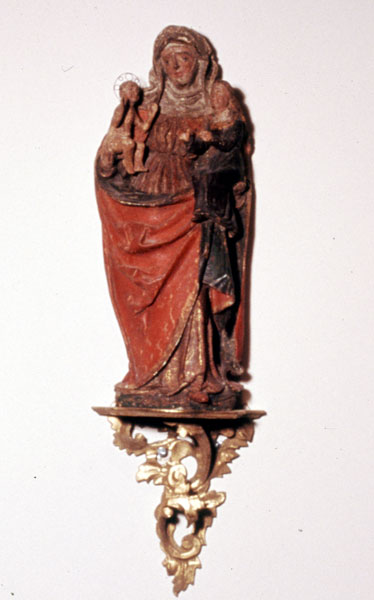 This polychrome statue of St. Ann, mother of Mary and grandmother of Jesus, was made in the Rhine Valley during the 30 Years War. The clue about the dating comes from clothing of that period. It was probably part of a three-figure home altar including Christ and Mary. St. Ann holds Mary in her left arm and the Christ child with a nimbus (a halo or cloud surrounding a deity) in her right arm. This is an unusual statue because Ann is rarely shown holding Jesus and Mary. It was purchased from the Philadelphia Museum of Art. Anne is mentioned in an apocryphal book, the Book of James, written in 170 A.D.

“Ann worship” became popular after the 8th century. In the 16th century, Martin Luther attacked the worshipping of Anne as almost a deity who supposedly always accompanied Mary and Jesus. She is the patron saint of women in labor, mothers, stablemen, and of Taos, New Mexico, among others. [source: tour notes]