Charting an Early Life Together

The marriage of Louise Foucar and Tom Marshall occurred on August 24, 1904. She disliked publicity, so the couple traveled to El Paso to be married at St. Clements Episcopal Church by Reverend Henry Easter. One witness was present. The choice of church was somewhat interesting in that she was Methodist and he was Presbyterian. Only a few lines announcing the ceremony appeared in a Tucson newspaper. The relationship of this extraordinarily diverse couple had already attracted attention and generated gossip in town. She had come to the desert climate because of continuing poor health. This contrasted substantially with Tom's robust energy.

Louise Henriefte Foucar, was born on May 31, 1864 in Boston. She came from a strict and stable family. The Foucars were French Huguenots, religious refugees in 1690 who settled in a French speaking village near Frankfort in Germany. Her parents immigrated to the United States, arriving in Boston in 1855. Her father was a leather-varnisher. Through hard work and thrift, he was able to build the Foucar Leather factory in 1883, the year Louise graduated from the Girl's High School in Boston. Unfortunately Louise suffered severe respiratory problems which forced her to relocate from Boston immediately after high school graduation. For 18 months she lived in El Paso, Texas where she learned a fifth language, Spanish, to go along with English, German, French and Latin.

By the time she arrived at the University of Arizona, she had attended the University at Mexico City (1888-1890) and earned two degrees in four years (1890-1894) from the University of Denver. While still at Denver, she started graduate work and taught French and German. In 1895 and 1896, she took the "grand tour" of Europe, a study trip which provided her the opportunity to consult with doctors in Switzerland on her physical condition. Her health faded and she needed a dry desert climate. At that time, the only University in a dry climate was the fledgling U of A.

She arrived in Tucson on December 30, 1898, to take up graduate studies at the University. During the spring semester she was a graduate student in Botany under Professor James Toumey. A few months later, when Toumey left to take a position at Yale, he recommended his promising graduate student, Miss Foucar, to succeed him. During the course of her teaching career she also taught English, French, Spanish and plane geometry, and rose to be head of the Department of Ancient and Modern Languages in 1901-1902. She was the first female professor in University.

At the end of the 1902 academic year, Professor Foucar took a leave of absence and never returned to teaching. During her time at the University and for the next few years she counseled women students and, throughout her life, helped them financially make their way through college. She had developed an early business sense and maintained an adequate bank account which was started by her own savings and family contributions. In May 1901, Louise purchased land, a long, deep lot, directly north of the University and built a grand, two-story brick house for her own use and to provide housing for young female students at the University. It was her home that the couple lived in after their wedding.

Tom had been working for Louise regularly since the completion of the Santa Catalina Cottages at 803-811 East First Street in 1903. He provided light maintenance for the 8-room, two building complex. Louise's holdings were becoming extensive enough to warrant a manager and she chose Tom Marshall for the job. Early in 1904, he proposed marriage and was very persuasive. Tom was a handsome and a dashing figure. Louise eventually succumbed to his charms. She was happy and flattered by his attentions.

Her decision to marry Tom, given their obvious differences was not as difficult as may seem. Louise's own family experience certainly contributed. Her mother had married a man seven years younger and enjoyed a very happy 45 year relationship. Her father passed away in December of 1900. Her brother Edouard, however, proved to be a pesky annoyance. Edouard hired a private detective to spy on Louise and Tom as he was "concerned about his sister's welfare." This concern proved to be unfounded as Louise kept virtually all her assets in land, buildings and finances in her name only. Instead of seeing Tom as a potential gold-digger, so to speak, Louise might have seen him as her protector against Edouard.

The transition for Tom must have been difficult. Nothing in his background prepared him for the lifestyle that Louise was accustomed to. His had been the Spartan lifestyle of mining camps and the conditions of the working class.

She was definitely Victorian in her outlook and manners, and the home reflected a well-to-do standard of living. Tom was attracted to business development and he spent considerable time and money in several entrepreneurial ventures. Louise always went by L. F. Marshall after her marriage to counter the general prejudice exhibited toward women in business.

The marriage of a prosperous, well-educated college professor to an impoverished former student six years her junior must have appeared preposterous to the public. Because of the innuendo concerning his intentions, he did not receive the respect of their neighbors, several of whom were his former instructors. They thought of Tom as a person who could not always remember to come to class and had not earned a degree. They did not think he was their social and intellectual equal. Perhaps some were envious, some resentful of his good fortune in the marriage. If only he had been more tactful, perhaps having a sense of humor about his new station, or if he had been a more diligent student when he was at the university.

The Marshall's first joint business project, initiated in October 1904, was to have a 100 foot deep well dug on their property and sell water to the neighbors. This type of project certainly appealed to Tom in that it used technology he had learned during his days in Telluride. Louise thought this would be an outlet for Tom's restless energy. Homes were being built across the road on Speedway, on Olive Road and on First Street west of Park Avenue. The city water lines did not reach the University area. This resulted in the University sinking deep wells for its own use, but not to furnish water to the nearby homes. Many residences at that time had metal windmills and shallow wells, so the existence of a nearby water service was to their benefit. The business continued for five years, but quickly exposed some serious problems. Tom wanted to be in charge and he resented having his authority challenged. Louise also soon realized how poor his business judgment could be.

Later Louise wrote: " Soon after we were married, he decided to install a pump to supply water for the neighborhood and our own property (this included the Santa Catalina Apartments). Instead of a gasoline engine, he purchased a hot air Ryder Erickson pump that was obsolete even at that time and most unsatisfactory. We had great difficulty in obtaining replacement parts as they were no longer manufactured. This engine required refueling every twenty minutes and was a failure every way. One summer when I was away he ordered a new windmill although the one we had was as efficient as it was possible to be. When the windmill arrived I read the directions and found it was for a shallow well, only 20 feet or less, while our well required a line of over 100 feet. He failed to read the circular when he first wrote for it."

Louise and Tom did have many good times together. They had special ways of sharing their time. Early on Sunday mornings he would take her for a drive around the quiet city and out into the countryside. She chose that time because she could observe changes without meeting other people. In the early days, the Sunday morning trips were accomplished in horse and buggy; later an automobile provided the transportation. Other times they reverted to an activity that had initially brought them together. They walked out into the desert to seek out and examine plants; much as they had done on the grounds of the University when she was a botany instructor and he a groundskeeper. Both had intense interests in environmental issues and those provided both bonding and individual pursuits throughout their relationship.

Another outlet for the Marshall's environmental activism came through their involvement with the Arizona Audubon Society. Both became charter members of the chapter on April 15, 1908. Herbert Brown was the founder and first president of the Arizona Audubon Society, and was also curator of the Territorial Museum located on the University campus. Because of his position Brown came into regular contact with Tom Marshall and the young man developed and gave public lectures on birds under the elder's tutelage. As usual, Tom required the best equipment available and this led to the purchase of a Model C Balopticon projector costing $40.00. The projector utilized light created by an electrical spark and a carbon-arc. The carbon, shaped round and somewhat larger than a pencil, was fed into the machine by the operator. It took skill to feed the carbon at the correct speed. The slides Tom used were standard from the 1890s; a 4"x3-1/4" glass plate with emulsion on side to retain the image.

Construction of homes at 935 and 943 North Tyndall Avenue and still owned by the Marshall Foundation. 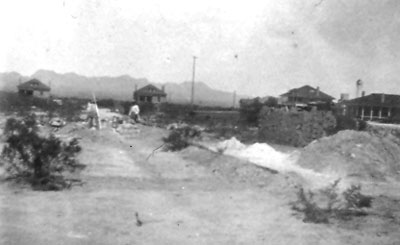 Perhaps the most happy moments in Louise and Tom's relationship took place during their late spring and late summer annual trips. Travel to escape the overbearing heat of summer in Tucson was common, and the couple toured in Mexico, California and around the west in general. They lived the good life in southern California. One area particularly enjoyed by Louise was Mission Cliff Park in San Diego. It had a rock fountain surrounded by a circle pond leading up to the fountain from four directions. The gravel walks were lined with wooden benches, flanked by palm trees, blooming flowers, rose and camellia bushes. The report back from their April 1911 trip to California was that the weather was warm and sunny. Louise felt well. Unfortunately, the good times were coming to an end.

The West University District was built out with a wonderful, eclectic collection of architectural styles. A typical streetscape of Territorial dwellings in West University had windmills and water tanks.