An outgrowth of Tom's political involvement was the beginning of his writing career. In 1915, he wrote and published a 73 page book entitled, Prohibition in Arizona: The First Six Months of Prohibition in Arizona and its Effect Upon Industry, Savings and Municipal Government. Together with Gammage, Tom Marshall began his foray into political journalism and publishing.

Grady Gammage had arrived in Tucson during the summer of 1912 as a 19 year old ready to enter the University of Arizona as a freshman. He traveled from his native Arkansas because of an illness, probably tuberculosis, for which his doctor advised relocating to a dry, warm climate. He wrote to the Governor of Arizona, G. W. P. Hunt, asking for a job to support himself while studying at the University. When he arrived in Tucson, a maintenance job was waiting. He also worked at the T. Ed. Litt drugstore soda fountain in downtown Tucson. In 1914, he returned to Prescott, Arkansas to marry his high school teacher, Miss Dixie Dees who was ten years his senior.

Gammage's experiences meeting people with Tom and traveling the state in support of prohibition proved to be excellent preliminary training for a law career. After graduation in 1916 he resolved to continue on to earn a law degree. For support, he entered journalism and for two years worked as editor of a Tucson weekly, the Post. Gammage did very well as editor of the newspaper, but his aspirations toward law were redirected toward educational administration. Tom Marshall was owner and publisher of the Post having purchased the newspaper in 1915. Louise provided some recollections on the success of the venture:

"When he started in the printing business he purchased a Monotype, a typesetting machine used only in the largest establishments for certain classes of work. This machine required a specialized operator, at a fancy price. He had so much difficulty in obtaining one that he finally sent a young man to Philadelphia to learn to operate it and to keep it in repairs. Of course he paid all expenses.

"That machine cost $13,000 plus freight, and it is doubtful if today [1931] we could get much more then the freight out of it. When he first opened the printing shop business, he hired a full complement of the best printers and press men, at the Union wage and then put a high school boy without experience, in charge of the office and to solicit the work. He thought his only duty would be to deposit money in the bank. He soon learned differently.

"He published a weekly paper for about two years for which he never wrote a line and which was printed at almost a complete loss. The whole printing venture proved a loss [ofj over $100,000."

Tom may never have written a line, but he nevertheless made political enemies with material published in the Post. On February 15, 1919, an article ran essentially accusing some of the most powerful individuals in town of bribery in relationship to the electric power company. "It is a rule," the Post charged, "that one cannot get something for nothing, and it is but reasonable to believe that the electric light company did not get $284,000.00 for nothing. Since it is plain through what source these favors were procured, the City Council, the Chamber of Commerce, and the Corporation Commission; the rest is also plain." The 1920 U. S. Census lists Grady Grammage as editor of the Tucson Post.

These accusations set off a firestorm, including legal proceedings where Tom Marshall and the Post were accused of liable in claiming that bribes were given to raise electric rates. On October 19, 1919, the Tucson Citizen ran a very critical article of the affair under the headline, "Tom Marshall Is Out to Run the City." It turns out that Tom, a Republican, was seeking Democrats to run for City Council and oppose those Democrats on the Council deemed "too friendly to the Tucson Gas, Electric Light and Power Co." Besides the imbroglio over electric rates, Tom's reforming crusades brought him into conflict with the local courthouse.

The prohibition amendment to the constitution is as follows:
Section 1. Ardent spirits, ale, beer, wine, or intoxicating liquor or liquors of whatever kind shall not be manufactured in, or introduced into the State of Arizona under any pretense. Every person who sells, exchanges, gives, barters, or disposes of any ardent spirits, ale, beer, wine, or intoxicating liquor of any kind, shall be guilty of a misdemeanor and upon conviction shall be imprisoned for not less than ten days nor more than two years, and fined not less than twenty-five dollars and costs nor more than three hundred dollars and costs for each offense; provided, that nothing in this amendment contained shall apply to the manufacture or sale of denatured alcohol.
Section 2. The legislature shall by appropriate legislation provide for the carrying into effect of this amendment.
Section 3. This amendment shall take effect on, and be in force on and after the first day of January, 1915.
It was voted upon November 3,1914. It went into
effect January 1,1915.
The vote was as follows:
For, 25,887.
Against, 22,743.
Arizona has equal suffrage.

First, he sought to expose alleged lax enforcement of the prohibition laws. His charge against Judge Pattee was that he was too lenient, County Attorney Kirk Moore recommended clemency in too many cases, and Justice Oscar Pease was not "firm enough in holding defendants in liquor cases in the Superior Court."

A second issue revolved around County Engineer W. C. Goetz and Clerk of the Board of Supervisors Bertrum Hitch, whom Tom Marshall believed had held office too long.

As the election neared, the mud flew and Tom caught his share. The opposition press alleged that Tom would deliver the "High-Brow" vote and had "women's vote in his vest pocket." Louise was generally hurt and embarrassed about the whole affair, especially when innuendo was raised as to her role with the Board of Regents. Governor George W. P. Hunt had appointed Louise as a member of the University Board of Regents. She had little enthusiasm for Tom's role in politics. She would provide financial support for his many business adventures, but could not tolerate the public exposure of a political campaign.

The parade route extends down South Meyer Avenue. A typical parade for Tucson of 1911 and some decades to come which includes both the traditional horses and rolling stock, and the new mechanical contraption known as the automobile. 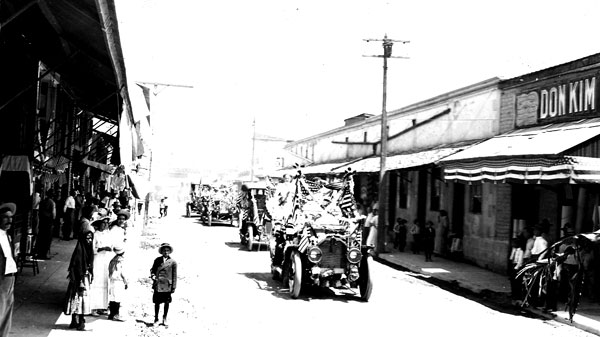 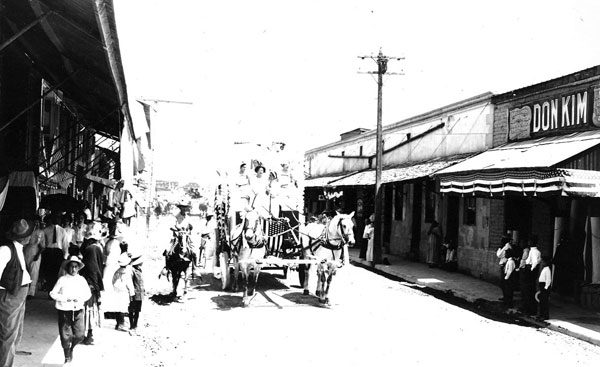