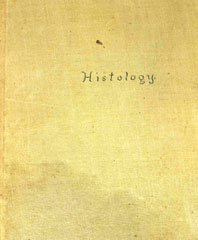 The Wikipedia article on Histology explains that histology "is the study of tissue sectioned as a thin slice, using a microtome. It can be described as microscopic anatomy. The photographing of stained cells is called histography. Histology is an essential tool of biology."

The article further explains that "In the 19th century, histology was an academic discipline in its own right.

As told in Patricia Stephenson's University Neighborhood, Louise Foucar registered at the UA but the only course that she was eligible to take at the time was a botany course taught Professor James W. Toumey. In A Photogrphic History of the University of Arizona 1885 - 1985 (p. 28), Phyllis Ball wrote that Toumey was one of the UA's six original faculty members and held the title of Botanist for the Agricultural Experiment Station. Alumni will be interested in knowing that it was James Toumey who began the University's original cactus garden in 1896. He left the UA two months after Louise began her studies for Yale University where he helped found the Yale School of Forestry.

In the letter to a friend quoted on the University Neighborhood website, Louise wrote that Toumey "showed me how to use the microscope and to make slides; then he pointed out to the desert and said 'There is your work.'" She later recalled that in a trip of an hour over the campus she found twenty-three blooming desert plants.

Examining the detail Louise included in her Histology sheds light on why two months after meeting her, Professor Toumey recommended her as his successor.

Each of the sketches drawn by Louise Foucar Marshall may be view on the following pages.