The Corner of First Street and Tyndall, 1905

Tom Marshall took a series of photographs in July and August 1905 to show the progress of building 935 and 943 North Tyndall Avenue. There were two houses still standing in 1990. 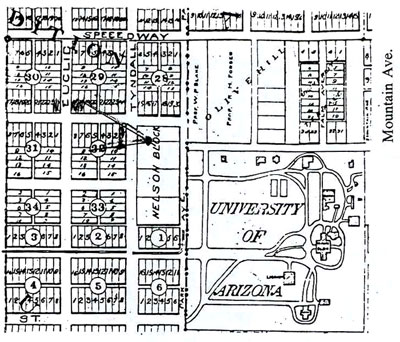 The angle on the above photograph is nearly identical to the homes that were on Euclid. The above picture dates from 1910, and a back porch has been made into a screen porch. In 1923 a duplex was built between the brick houses as shown in the 1990 photograph below.

Land elevation is a factor to consider when choosing a site for a building. High areas that are not subject to flooding are a good location for a building; That is why Louise Foucar chose land along First Street. It is also interesting to note almost all her buildings faced south or east and toward the University.

If you look at the height of the retaining walls on lots with original buildings on them, you can get an idea of the elevation. Originally in the middle of the blocks between First Street and Speedway, there was an arroyo running from Olive Road to First Avenue, First Street was on higher ground.