An introduction to equine transportation
Early railroads used both steam and horsedrawn equipment. The first horse car was built by John Stephenson of New York in 1832 for the New York and Harlem Railroad. While primarily a steam line, the New York City end of the line was operated much like a street railway with tracks buried in the street and local passenger service provided. Others took note of the virtually friction-free movement of steel wheels on steel rails, realizing the consequent advantages over the horsedrawn omnibus--much more horsepower per passenger was needed to pull a loaded omnibus out of mud holes and ruts than to move a streetcar down an essentially level and smooth track. But the depression which began in 1836 delayed the widespread introduction of horsecars until the 1850's. By the mid-1880's most omnibus lines in larger cities, and many in smaller cities, had been replaced by streetcar lines. Until roads began to be paved in significant numbers primarily due to the advent of the automobile, public transit on rails was universally acknowledged as the way to go.

However, the use of animals as motive power had many significant drawbacks. Horses could only work four hours or less per day, and in hot weather (which is not unknown in Tucson) they had to be replaced after every trip (although of course they could be reused some hours later when rested). The result was that, in 1903, the Tucson Street Railway had to have 34 head of stock to keep three or four streetcars a day on the road. This amounts to about six changes of the team per day, or over a 12-hour day each team would work about 2 hours. The sheer number of animals needing to be maintained and the impact on the economy is reflected in a news article in the Arizona Weekly Citizen of May 23, 1896:

Electric railways have displaced in the United States no less than 275,000 horses, says the Pittsburg (sic) Dispatch. So many horses would require about 125,000 bushels of grain a day to feed them, amounting to 45,000,000 bushels a year. The loss of the commercial demand for this grain has been an enormous loss of transportation tonage (sic) for the railways.
Of course, what goes in one end as grain comes out the other end as manure, requiring constant street cleaning and disposal. There was also the problem of service interruptions due to the stubbornness of the mule or horse-witness the classic Tucson photo with the mule on the ground at Stone and Congress. More seriously, illness and death could bring the whole street railway industry to a halt as happened with the "great epizootic" epidemic of 1872-3. This lethal flu-like disease killed thousands of horses across North America. Desperate street car companies tried oxen and even human gangs to pull the cars, but with little success. Finally, there was a need to retire the animals after only a few years of hard work. All this led street railway companies to seek a replacement for the animal-powered system.

The obvious first choice was to try steam which was used so successfully by the main-line railroads. However, the use of a steam engine on the streets of a city was more difficult because it scared the horses. The solution was to disguise the engine with a body resembling a horsecar. This ruse contained some of the noise and kept some of the escaping steam inside, but it must not have worked too well-the use of "steam dummies" as they were known, was never wide-spread. They were used as early as 1860 in San Francisco, and later in a number of places closer to Tucson: San Diego and San Bernardino, California, and Douglas, Arizona. A steam engine is labor-intensive to maintain, so the few steam lines that existed were converted to electric fairly quickly. 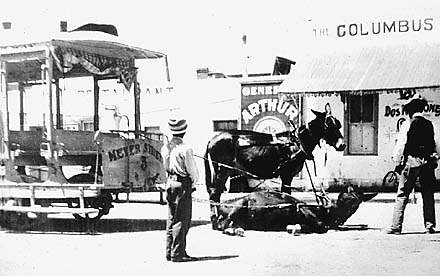 Alex Rossi's Columbus Saloon, Stone and Congress
The next alternative to emerge was the cable railway. Cable cars had been used in mining and other industrial applications for some time, but cars were always attached directly to the cable. Cars in the street had to be able to stop for passengers and other traffic. There was a need for a practical "grip" to grasp and/or release the moving cable as desired. In 1873, Andrew S. Hallidie of San Francisco developed such a grip, and the success of his invention was immediate in allowing cars to climb the steep hills of his home city safely. This innovation quickly spread to 25 other U. S. cities (whether they had hills or not), although in no city did they totally replace horsecars. Despite the extreme expense of creating vaults for the cables to run under each street which had a car line, it solved the problems caused by the horsecar. Even with the high initial expense, they were more economical as each could carry so many more passengers than a horsecar. The advent of a successful electric streetcar 14 years later in 1887, caused cable lines to be abandoned as quickly as they were installed. By the time of the 1906 San Francisco earthquake, they were all gone, except those few in Seattle and San Francisco on routes too steep to be served by electric lines.

Other more exotic schemes were tried, including compressed air, naphtha and batteries, with little success. Battery cars did run in New York City on the Third Avenue Railway System and in Billings, Montana, but their use was not widespread due to the weight and unreliability of the batteries. 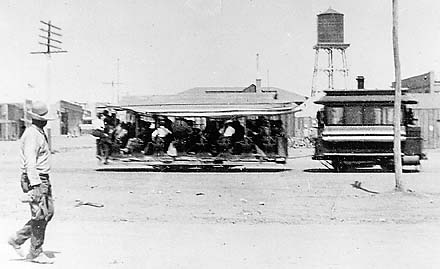 Douglas (Arizona) Street Railway Street Dummy
While cable and steam came and went, in many places the horsecar plodded on. For lightly used lines, or in small towns with short lines (such as Tucson), and a sometimes inadequate supply of electricity, the horsecar made economic sense. In Phoenix, the bulk of the system was electrified in 1893. However, the Grand Avenue line remained horse powered until 1909.

Why was the Tucson Street Railway constructed as a horse/mule drawn line rather than electric? After all, the electric streetcar had been in common use for a decade when the company was formed in 1897. In short, dependable power was unavailable. While Tucson had an electric company which had been established in August 1883, its power plant was inadequate to supply lighting for homes, businesses, and streetlights. In fact, for three years between 1885 and 1888 the city was without streetlights. The electric company was reorganized in October 1892, but the old power plant on Church opposite the Court House was simply not big enough for the growing community. It was not until a new plant was completed in January 1904 on 6th Street between Court and Main that the Tucson Gas, Electric Light & Power Company had the capacity to provide the power required by electric streetcars.

But even had sufficient electricity been available, it is questionable whether the directors of the Tucson Street Railway would have opted for electric cars. It was significantly cheaper to install a horse-drawn system without the expense of poles and overhead line. Of course, the company had to buy horses and mules, and feed and replace them, but for the most part that could be considered a continuing operating expense. They didn't have to come up with a lot of capital before beginning operations. Whether these were the only considerations, cannot be known a century later. In any case, and strange as it may seem today, the decision was made to use animal power.