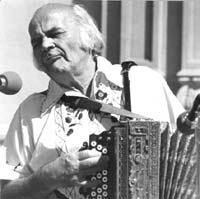 This bit of biographical information on the late Joseph Soukup was provided in an email message to Stuart Glogoff on January 15, 2003, by Dr. James S. Griffith and updated by David Soukup, Joseph's son, on March 22, 2004.

The late Joseph Soukup, who was Czech, born in Cleveland, Ohio in 1904. He died in 1995 in New York City, after moving there to be closer to his family. His father played button accordion. Joe found the instrument in the attic, learned to play. He worked much of his life for the city of Cleveland, played at weddings and other family get-togethers. After he retired to Tucson, his music became a feature of gatherings of the Czecholsovakian-American Social Club. He was a TMY "regular from its first year up into the late '80s at least. He then moved back East again to be with his son's family, and, as I said, died in the mid-90s as best I can remember. He is featured on the TMY LP called "Hot Times in Tucson: Arizona Music from Tucson Meet Yourself." Several copies of this should be in the SWFC archives. He specialized in Czech polkas and waltzes. The tune he plays on the record is "Do Kolechka Do Kola - the Dancing Around Polka."

Part of which site
Music of the Southwest