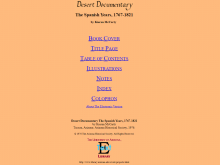 Researcher Kieran McCarty's wrote of this region's heritage as being "firmly fixed in this period, though five different flags have waved over the land since colonial times." His research reports of the day-to-day life of the Spaniards after the founding of Tucson in 1775, the complexities of building a frontier mission church, and the role of Tucson's presidial soldiers during the war for Mexican independence.